Overviews and Links to Each Big 10 Spring Game

Share All sharing options for: Overviews and Links to Each Big 10 Spring Game

The Big 10 teams finished their Spring Practices this weekend with scrimmages and games, so I wanted to put up some links to each team's final competition.

Although the Daily Gopher is claiming a QB controversy might exist now in Minnesota, I only see increased depth, something no team will complain about.

Only Colors, the brand new Spartan Blog has a couple articles detailing the strong linebacker play and the competition that inevitably will exist at the QB spot. 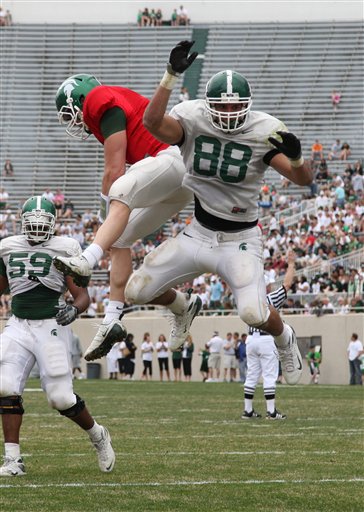 Check BSD's open thread for pictures of the Spring Game and the PSU players. Attendance in Happy Valley? 76,500.

Thanks to their Spring Game, apparently Wisconsin and Bucky's 5th Quarter feels like having a quarterback controversy too.

"Most eyes were locked on the RB slot as it remains a major question mark heading into the 2009 season. Admittedly I was not able to put the game under a microscope as I juggled three girls' (age 5 and under) attention spans with a constant mix of "Where's Willie the Wildcat?" with hanging out with the marching band."  LTP's comment from the game. He also gives a rundown of NW's highlights from their Spring Scrimmage. Attendance? 3,200.

The Iowa press hasn't put much emphasis on the Hawkeyes Spring Game. Backups galore contributed to the Scrimmage.

Quarterback play got the attention in the highlights, but running back Ralph Bolden was the star with 100+ yards rushing.

Juice Williams went 13-26 with 150 yards and no one important got hurt. I'd say this was a success.

And in case you haven't reviewed them, here are The Rivalry's look at the much hyped Tate Forcier debut and Saturday's Buckeye Spring Game.