# Players Picked From Each Big 10 School

Wisconsin (4) - Travis Beckum (looks like we correctly predicted when he would get drafted...in January-take that you experts), DeAndre Levy, Matt Shaughnessy, Kraig Urbik 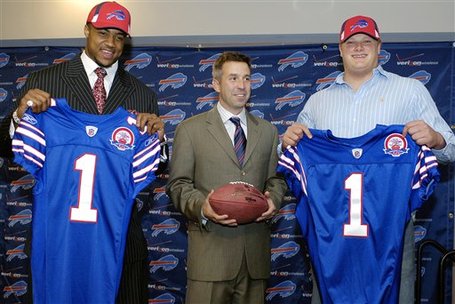 First Round Money...Maybin (left) about to be rolling in a Maybach

Beanie Wells went to Arizona in the first round. Will Beanie the Destroyer and his 240 lb. frame fit in Arizona's Spread Offense?

Deon Butler helped himself considerably this offseason, running 4.3 40 times and dominating pre-draft practices. The Seahawks are going to be extremely happy with their third round selection.

We knew someone would be ripped for choosing Brian Robiskie. That unlucky team is the Cleveland Browns, who scooped up Robiskie in Round 2. He hasn't played a down and is being referred to as having the ceiling of a complimentary receiver. Touche. At least Robiskie (who grew up in Cleveland and played for OSU) won't be far from home.

Somehow Morgan Trent, the five star recruit Michigan cornerback who underperformed at UM, got drafted in Round 6. I know he's fast, but his years at Michigan weren't entirely fruitful.