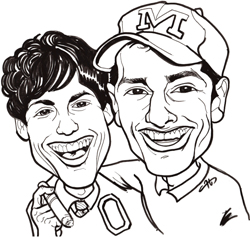 It's true.  Exactly one year ago today, TRE was born on Blogspot.  In our first post (available here) we asked --

Does the sports world really need another blog, another bleeding ventricle of spirit, frustration, and irrationality?

It was a startling miscarrage of a partnership, built on patent leather winged chairs, tall draft-beers, suspenders, Churchills, and, of course, a blinding reverence for all things college football.

And that, is because of you, our faithful readership.  We couldn't do it without you.

As a look-back at the year that's been, here's a countdown of my

Our first attempt at satire backfired.  Or did it?

Graham breaks down his hopes for the conference in 2008.  Almost none of them come true.

Should student athletes be subjected to standard admissions criterion when applying to undergraduate institutions?  Graham and I don't see eye to eye.

6.  Truth Functional Conditionals, or why we can't accept that it's any given Saturday -- or Thursday
September 27th, 2008

Can we learn anything from upsets?  A break down of the patterns behind rankings.

Bama imagines a world where athletic directors and conference commissioners are bold, fearless, and do what is best for their fans.  In other words, this is a work of fiction.

An editorial chronicle of the Rivalry's journey to see No. 12 Ohio State play at Wisconsin.

This one, a recurring site topic, inspired a spirited debate.

2.  TRE Gets an Exclusive Interview with Brad Banks
September 2nd, 2008

How Graham pulled this off I'll never know.

A tongue-in-cheek review of four modern coaches and their predicted smoke of choice.