The Setup and the Players

#9 Michigan State rolled into Orlando for the 2000 Citrus Bowl to take on Steve Spurrier's #10 Florida Gators. The 9-2 Spartans had defeated Notre Dame, Michigan, Penn State, and Ohio State - MSU had not accomplished that feat since the National Championship year of 1965. Florida's Run and Gun was still in its ultra effective heyday, although Spurrier's 1999 team had finished the season by losing to rival Florida State and Alabama.

This Spartan team will be remembered for its landmark wins against the Midwest's best, but Nick Saban (and then Bobby Williams) should be lauded for running the Pro Form offense to a T in '99 (ultra dorky football nerd joke intended). The Spartans got great production from a cohesive offensive line - the trench boys helped tailbacks TJ Duckett and Lloyd Clemons combine for 1,383 yards rushing and 10 touchdowns (all by Duckett). WR Plaxico Burress was blowing up all over the place - his 255 yards receiving against Michigan cemented him in the MSU record books for good. 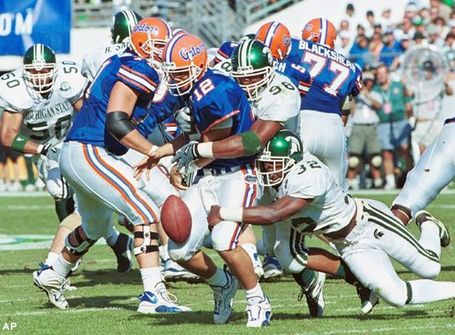 I'm sure that my explanation of this game would be solid, but my closest connection to this Spartan team is that my friend's sister dated Spartan kicker, and game hero, Paul Edinger. A much better recollection comes from LVS of The Only Colors...

MSU fans will remember the 2000 Citrus Bowl for a few reasons:

First and foremost, we had a damned good team.  We ended the season 10-2, and had it not been for two consecutive bad games against Wisconsin and Purdue, we would have been a BCS team.  In fact, I think the guys on our team played the Citrus Bowl with more than a little bit of a chip on their shoulders, after they were passed over in favor of Michigan (a team that had the same record as us, and which we had beaten) for an Orange Bowl berth.  We featured future Pro Bowl players on both offense (Plaxico Burress) and defense (Julian Peterson), as well as several other players who made an NFL impact (T.J. Duckett, Paul Edinger, etc.)  It was our best team since at least 1987 -- and probably earlier -- and we haven't had a better one since.

Second, it's somewhat erroneously remembered as the game which spawned the unfortunate tenure of Bobby Williams as head coach.  (Erroneous because the AD had removed the "interim" tag approximately three weeks earlier.)  Still, it was a victory in a big bowl game which allowed an obscure career assistant to step out of the shadow of a much better known predecessor, who had recently left on bad terms.  Hey, Mountaineers, does this sound familiar?

Third, it marked the true coming-out party for one Plaxico Burress.  Before he became, uh, more well known, Plaxico put himself on the national radar screen by almost singlehandedly beating Florida. He caught 3 TD passes, dominated a good Florida secondary...and slowly sunk MSU fans into depression, then happiness, then depression, as each successive catch was accompanied by the cold reality that we were watching an NFL player on a college team.  He made it official a short time later, and that was the end of Plax in Green and White.

And finally, it had the requisite dramatic ending, as Paul Edinger kicked a 40 yard game winner as time expired.  This was before the SECPWNSALL meme had truly taken root, so the victory was perhaps a bit less meaningful then than it would be now, but the truth is that we beat a pretty good SEC team in a stadium an hour away from their campus.  Not bad.  As I alluded to before, however, I think most MSU fans look back at this game in a bittersweet way: it was our last major triumph before heading into the college football wilderness for the better part of the decade. (A fate even made even crueler when you consider that we watched our program turn into a maelstrom of dysfunction and embarrassment while, simultaneously, our former coach created a juggernaut at LSU).

Edinger making the game winner, followed by Michigan State quite predictably running to midfield and breaking out the Gator chomping motion. I think its now requisite for all human beings to mock the Gator chomp when you defeat anything related to the University of Florida...it might even be coded into our genes. I also think teams from Michigan find all kinds of ways to offend in post game celebrations - see here for a nice example, but don't forget Chris Webber rubbing his crotch all over the center court at the Breslin...classy.

The University of Florida is a quarterback factory, breeding great college quarterbacks who fail to pan out in the pro's. Johnson was no different (7 NFL years mostly as a backup), and his inefficient 24-50 passing performance and a key fumble kept MSU in the game.

LVS sums up this classic victory...

The game has significant lasting positive appeal for MSU fans. Almost ten years later, the images of Burress making the UF secondary look silly, T.J. Turner returning a fumble for a touchdown, Spurrier's slow burn, and Edinger winning the game all remain quite vivid. A great game, which also truly ended an era at State. It won't be forgotten anytime soon.