Amidst the water-logged turf and brown-trodden tree lines Joe Paterno looks a few years younger as he paces the sidelines for spring practice drills in State College, PA.  The legend is entering his 60th season on the Penn State staff -- his 44th as commander-in-chief.

A short year ago, critics wondered out loud whether the icon had any gas left in the tank; whether his decision to cling white-knuckled to his position as the program he made fell slowly into mediocrity was an was an unintentional hubris.  Was it time for a younger, more innovative leader?

Even Tom Dienhart can't deny the powerful way Paterno silenced his critics.  The Nittany Lions, floored by a new high-definition offense, and pro-style pass game -- and anchored by a hollow hitting defense, stormed the FBS landscape in 2008, to the tune of an 11-1 regular season, and a bid in the Rose Bowl. 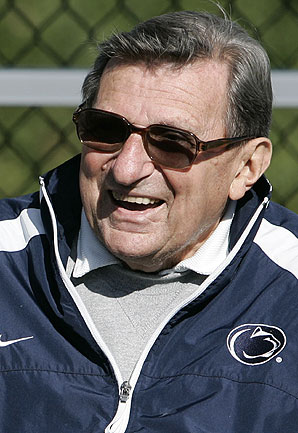 Sixty down. Sixty to go.

What happened next is something Lions fans would like to forget.  As I wrote:

"Sure, they played four whole quarters, and didn't quit when it looked like they might be turned into pillars of salt by the stratospheric talent differential, but I'm not here to sugar coat things.  The Nittany Lions were the epitome of uncool: from Daryll Clark's soft in the belly shyness after a successful quarterback draw led to Penn State's only first half points, to Joe Pa's falling asleep at the wheel strategy late in the game (i.e. opting for a field goal down 14-38 with 7:22 left to play).  The apparent justification?  He wanted to give Kevin Kelly the chance to kick a field goal in a Rose Bowl Game.  Aww, shucks, that's nice.

No wonder the Lions were wearing white: it's universal for 'we surrender.'"

Penn State lost to USC by 14 points, a deficit that doesn't begin to express the impact the loss has had on the players and the program.  Paterno says it best, "We didn't play well, we didn't coach well. I walked away from it not feeling good about anything. I think we can do better."

They'll have to do it without 15 starters from the 2008 Rose Bowl team.

The primary challenge of spring practice will be identifying replacements for the signifcant losses on both sides of the ball.  The Bleacher Report puts the gaps into perspective:

Defensive ends Maurice Evans and Aaron Maybin both left school early for the NFL leaving two defensive end spots open. Maybin an All-American will be missed a lot because of his speed, as a rush end he was phenomenal in the passing game...Also lost on the defensive line is starting defensive end Josh Gaines. Gaines leadership, and consistent play will be missed...

Outside Linebacker Tyrell Sales, a two year starter along with everyone in the secondary’s gone. Corners Lydell Sargeant and Tony Davis...consistently shut down receivers with great awareness, and coverage...Safeties Anthony Scirrotto, and Mark Rubin are both gone as well

On the offensive side of the ball much experience is lost. Receivers Deon Butler, Jordan Norwood, and Derrick Williams [were] one of the best receiving corps in the country

Who will fill these big black shoes?

Let's talk defense first.  Although the lions secondary is scalped, there's a positive buzz around the program about safety Drew Astorino and cornerback A.J. Wallace.  Wallace's speed and athleticism in particular should go a long way towards sewing up the secondary. 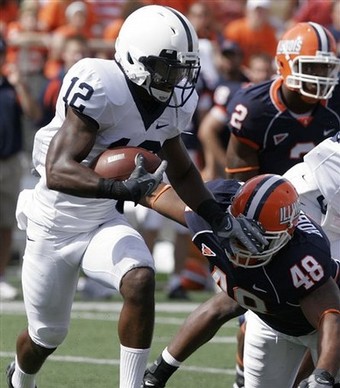 Is A.J. Wallace the fastest man on the field?

Still, the bread and butter of any Penn State defense is its linebacker play.  Although the luster of the laudable "Linebacker U" has been tarnished, the return of Sean Lee from injuries will give the Lions a Champagne-cork of a popper in the midfield.  The fact that Lee is "considered Penn State’s best defensive player heading into this year," shows just how much power Paterno will pack behind the line.  After all, last year's standout Navorro Bowman only figures to improve.

The linebackers will have to adapt to a young line, particularly lightloaded by the defection of All-American Aaron Maybin to the NFL.

The offense won't fare as well, but it does have the benefit of dual-threatster Daryll Clark back behind center.  Bolstering the ground game, are running backs Evan Royster and Stephfon Green.  In a conference known for its power running obsession, Royster earns the distinction of being the league's biggest bruiser.  Expect Penn State to ground down the turf and run out the clock at will.

Meanwhile, to keep from reverting back to standard definition, receivers Graham Zug and Brett Bracket will keep the offense diversified.

Ultimately, Penn State's success will depend on Evan Royster staying healthy, and Daryll Clark's ability to produce at his 2008 level.

If you want to stay at the top of the Big Ten, you've got to beat Ohio State consistently.  For the second year in a row the new biggest rivalry in the Big Ten should decide the conference.

Sorry, Lions faithful but an out of conference schedule as menacing as a gummy bear won't do you any favors when it comes to the national championship race.  An undefeated Nittany Lion team (that beats a one-loss Ohio State squad, whose blemish is again at the hands of the USC Trojans) won't rise any higher than 3rd in the polls -- in favor of a one loss SEC, Big 12, or Pac 10 foe.  Start your grumbling now.