The Setup and the Players

#14 Iowa rolled into Orlando on a seven game win streak, which included defeats of Big 10 powers Ohio State, Penn State, Wisconsin, and Purdue (they used to have a football team). All coach Kirk Ferentz needed for another 10 win season was to defeat the #12 Louisiana State Tigers and their massive amounts of SEC speed. 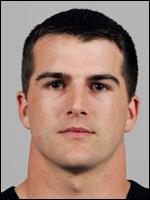 It's always fun to look at these old matchups, because you see the amount of talent on both sides of the ball. The Hawkeyes were led by quarterback Drew Tate and a defense stacked with future NFL players (Chad Greenway, Abdul Hodge, Sean Considine, Matt Roth, Jonathon Babineaux). LSU featured Indi star RB Joseph Addai and former #1 overall pick Jamarcus Russell...in backup roles. All-American DE Marcus Spears was the most hyped player for a defense that ranked third in the nation for ypg allowed, while Laron Laundry and Corey Webster (NYG) made the LSU backfield pretty damn intimidating.

Things that people forget about that game:

It was a great game between two outstanding teams, regardless of how that last 9 seconds played out. Iowa dominated early and did all of the smart "little things" right. LSU brought JaMarcus Russell in at QB and started chipping away at the Hawkeye's early lead. The LSU go-ahead TD capped a great comeback by the Tigers.

Here are the countdown games so far...

Kirk Ferentz and Drew Tate earned Fs in time management for the game ending possession. If you listen to Gary Dolphin calling the last 46 seconds, you can hear him saying "You gotta call a timeout" a dozen times. Iowa completed a pass short of a First Down with 30 seconds left and didn't call one of their two timeouts. Drew Tate spiked the ball with 16 seconds left, but the line wasn't set. 5 yard penalty (back to the Iowa 40) and the ref winds the clock. As Dolph yells, "They've started the clock AND DREW DOESN"T KNOW THAT!" Ferentz said that the miracle play really bailed him out for the clock management, and he was right. It should be noted, 2004 was the last year the TOs had to be called by a player (not a coach on the sideline).

Warren Holloway caught the ball at the 15 yard line. Despite the blown coverage, there were two LSU DBs with a shot at him. One was blocked by Ed Hinkel (one of those great unnoticed plays that wins games), the other missed the tackle at the 10 yard line. If the tackle is made, the clock runs out and LSU wins 25-24. Instead, Holloway gets his only career TD catch (and never has to buy a beer within the state lines again) on the last play of his career.

As for me, I watched the game in my living room with my wife (also an Iowa grad) and my 5 week old son.  As I was jumping up and down screaming, all my wife could say was "DON'T DROP THE BABY!!!!!!"  One of my five favorite moments as a sports fan. 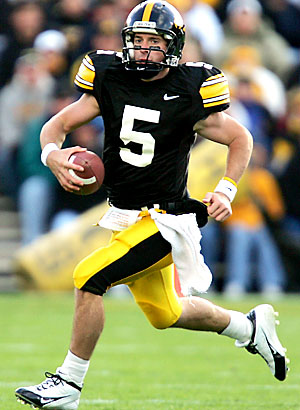 We didn't know at the time that this was the capstone of the 2002-04 Hawkeye run.  The ‘05 season started with talk of a national championship, but the next three teams would each fail to meet their diminishing expectations.

Here's the audio of the Hawkeye radio play by play of the 46 seconds of that game on YouTube.

Apparently Iowa had the nation's worst rushing attack in '04-'05. That's actually quite an accomplishment.

Check out the downfield blocking on the magnificent Broussard run. The Reggie Bush-like cut and spring was fancy. The wide receiver making a picture-perfect crackback block was gritty.

What the hell was LSU doing on the final play? It looks as if two defensive backs were sent on a blitz on the weak side...and then they stopped and waited for something, leaving open the wide receivers running go routes.

Check out this semi not intriguing interview with Tate before the game, discussing how he hated O'Keefe his relationship with the coaches and the LSU defense.