Debates on Draft - Paterno. Rodriguez. Who is the Real Renaissance Man?

Share All sharing options for: Debates on Draft - Paterno. Rodriguez. Who is the Real Renaissance Man? 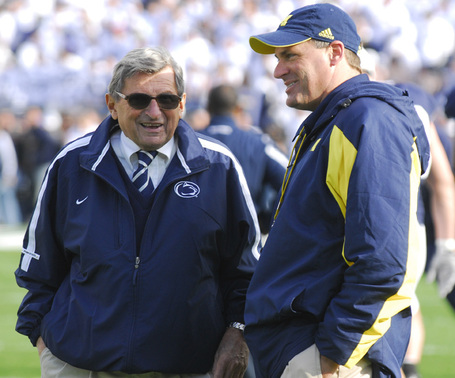 LB: So, this is new one for us.  We're going to work together on something.

GF: Don't get all mushy on me.
LB: You're the one IMing me from the bathtub.
GF: Yeah, let's keep this one quick, my Labatt Blue is getting warm.
LB: So, Joe Pa or Rich Rod?  Who intrigues you?

GF: Paterno. Hands down.  (And I'm not even saying that to get in good with BSD).
LB: I agree, but I think there's a problem with our frame of reference.  Paterno has been in the business for half a century, Rich is a la mode -- the flavor of the modern era.  How can we compare the two?

GF: By taking a snapshot in the present.  Rich Rod is overlord of one of the top 5 college football programs in the nation --
LB: -- You mean one of the top 5 programs, historically --
GF: Every move he makes is watched like a hawk.  Will he be able to pull off a turnaround?  Will his spread offense work in the Big 10?  See, right there, that's an intriguing guy.
LB: Okay, let's talk about the spread and the rust belt.  Do you know where Rich picked up his bag of tricks?
GF: Urban Meyer?
LB: No.  From guys named Tiller and Walker.  Who -- correct me if I'm mistaken -- were both coaching football in the Big Ten in 2000.
The spread offense is nothing new for the conference.  In fact, I'm glad you mentioned Urban Meyer -- the godfather of the SEC spread revolution earned his stripes attending clinics by the aforementioned Northerners.
GF:  We're not talking about the spread in the Big 10, we're talking about Michigan running the spread.  It's a big, big, difference.
But even if Rich is a hotter topic, his personality at Michigan has been nothing incendiary.  He hasn't pissed anyone off with idiotic remarks.  (See Lane Kiffin).  His offense had a grace period (1-2 years), so it's not like UM fans didn't know that there would be growing pains.

LB: Sure, he hasn't called conference patriarchs out.  But he has re-defined what it means to be a "Michigan Man."  Let's face it, the guy sticks out like a sore thumb, from his friendly, miners drawl, to his profane coaching methods.
An everyday guy in Ann Arbor.  That's intriguing.
GF: Whose press conference would you rather go to?
LB: Joe Pa, no question.
GF: Why?
LB: Because for the last 3 years the podium was Paterno's signature as a head coach.  It was, arguably, his greatest contribution to the team.  I mean, let's face it, the guy wasn't exactly helping guys settle into their stances.
GF: Plus he's such a legend that he can say whatever he wants.  Like that age rant he did.  The guy is a living legend who is full of interesting insight.  I'd love to meet him.  That spells "intriguing."
LB: Let's tackle let's tackle this related question then.  Which coach is more innovative?
GF: Joe Pa has allowed his assistants to reinvent the PSU offense.
LB: But Rodriguez did that first hand at WVU.
GF: Yeah but which one took his Spread Running System to the top of the Team Prestige Meter rankings in NCAA 2002?
LB: Rich Rod, it's the only edition I own.
Let's try a hypothetical.  Give me Paterno's three greatest accomplishments.
Rapid fire.  Don't over think it.
GF: 1. His longevity, 2. His national championships (including the ones he got f*cked over on), and 3. His development of Linebacker U.
LB: What about Rich?
GF: 1. He took the spread running offense into the mainstream, 2. He beat Oklahoma in the Sugar Bowl, and 3. He landed the Michigan job.
LB: Now, suppose Rich Rod (conveniently) ends up coaching for exactly the same duration as Paterno, and wins the same number of rings.  Whose biography do you want to ghost write?
GF: Rich.  It would be more shocking.
LB:  I disagree for two reasons: Rich Rod's offense (with the exception of the running plug ins) is largely standard.  (I find it telling that Paterno himself quipped about running the spread in the 40s).  And more importantly, Rich fails to really embody the spirit of his program.
GF:  Lloyd Carr embodied that spirit, and it got him fired.
LB: Any Buckeye fan will tell you what happens when a coach is simply a talent, rather than a figure.  John Cooper was hand-poached from Arizona State for his command of the game, but he never understood the Buckeye Brand: The history.  The tradition.  The excellence.  As a result, people in Columbus never stood up for him.
I love Paterno's personality, it reminds me of Sal in "Do the Right Thing."  Can you imagine Paterno behind the counter of a pizzeria in Bed-Stuy?  Picking fights over extra cheese.
Rich lacks that kind of extracurricular personality.  He isn't a character, he's a football coach.  He's that guy in the headset.
GF: Don't forget the old school component.  Joe Pa has the license to say things Rodriguez cannot, like adding a 12th team to the conference.
LB: That's another topic for another time.
But yeah, thanks Joe.  We owe you one.