Trash Talkin' in the Modern Era - When Does it Go Too Far?

Share All sharing options for: Trash Talkin' in the Modern Era - When Does it Go Too Far?

One morning in 2007, Tim Tebow woke up to discover his voice mail inbox swollen with negative messages. Some were indictments of his play, others were threats. All of them were from fans of rival Louisiana State, who fortuitously stumbled on Tebow's private digits in the week leading up to the team's epic clash in Baton Rouge.

After dumping his phone, and contacting campus police, Tebow did his best to "return" the attention. As he swooned into the endzone on a first-quarter touchdown run, he pointed to the crowd, and wagged his fingers next to his helmet, as if to say, "Call me anytime."

The Gator's star described the incident as "all in good fun." He had little choice. When dealing with a large, and fanatical fan base, athletes are often at the mercy of sub-rational prejudice, fever, and whim. Did the Tigers learn their lesson? Nope. Last year, they attempted to pull the same stunt on Georgia's Knowshon Moreno, circulating a New Jersey number via e-mail, before someone pulled the plug.

I mention these two incidents, in leading up to what has purportedly been happening to Ohio State's Terrelle Pryor. In an early May interview with ESPN's Kirk Herbstreit, Pryor reported his throwing ability had been called out by Michigan players via e-mail.

"[Michigan Players] tell me I can't throw and this and that, and I'm not that good and I'm overrated," says Pryor.

You'll recall that as the No. 1 overall recruit in 2008, Pryor was hotly pursued by the Wolverines. 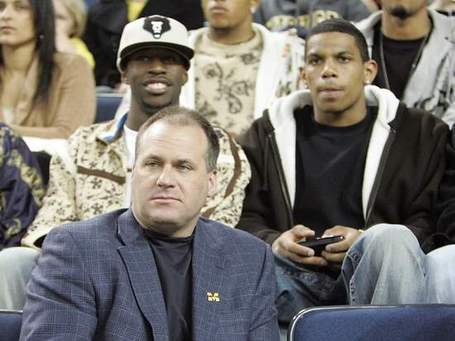 It's interesting, but I find myself less-bothered by an intemperate exchange between competitors than I do a fan/player exchange. Rivals have a change to face their detractors on the field of play. Private citizens, by contrast, have limited accountability. (Unless of course you count kicking their team's ass payback enough).

A modern era of communication makes it all too easy to get in touch with amateur athletes. Is this a bad thing?