Share All sharing options for: Evaluating the Mechanics of Big Ten Quarterbacks: Part 1

Welcome to the first edition of a new "elements" series on the site.  In our continuing attempt to place a tad more emphasis on the mechanics of the game, we'll use these interludes to dive deep into the innerworkings of players and offenses in the Big Ten.

Based on the popularity of last season's quarterback rankings, over the next week we'll look at 2009's chief signal callers, profiling what each projected starter does well and highlighting areas where there's room for improvement.  We'll purposely ignore statistics, and look instead at fundamentals. 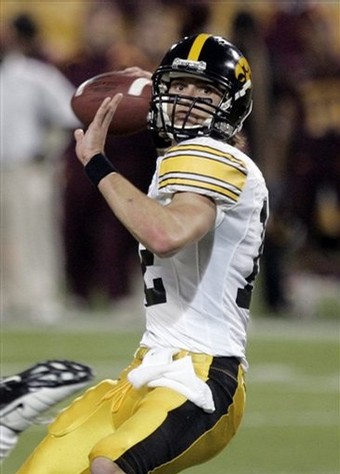 But first, we'll need a profile, or a model from which to evaluate individual competitors.  Accordingly, I'll use this entire article to address a deceptively simple question: What does a good passer look like?

Although there are a number of variables: hands, arm, field vision, release, and accuracy, and an even greater number of variations, the best passers repetitiously draw from a common pool of skills.  Let's cover them one-by-one.

As McCarthy notes, "A pass play begins as soon as the quarterback breaks the huddle.  He sizes up the defense.  His gaze must be impassive, always starting from the same side of the field and slowly sweeping and scanning the secondary."

When evaluating snaps, look at 1. security, 2. speed, and 3. the retreat.  We can further break these factors down into footwork (including the push off, pivot, and steps), the fake (if applicable), adaptation (e.g. stepping into the pocket to cut off the angle of the defensive end), and ball placement (including grip, and position).

The best passers keep their hands (and the ball) up at their shoulders.  They use their throwing hand to grip the ball snugly, fingers spread wide along its entire length.  The grip should be back of center with the pinky laying close to the middle of the ball.  The larger the hands and the wider the spread, the better the grip. 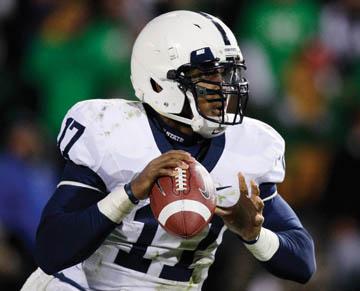 Daryll Clark illustrates near textbook form in the early snap.  Expect his left hand to continue to close on the ball, and his throwing arm to rise towards his right shoulder as he gets closer to the release.   Also note the position of his hand on the back of the ball, and his pinky on the mid-laces.

There's more to the release than simple posturing, although it's important that the quarterback 1. survey, 2. stand up, 3. step towards the receiver, and 4. snap his wrist.

Surveying available receivers is the most intangible part of a quarterback's fundamentals.  It's also the most important.  Without a good read on primary and secondary routes and coverages, even the strongest quarterback will flounder.  Todd Boeckman, anyone?

Look for the passer to keep his weight on his back foot, and throw to where the receiver will be at the time of intersection.  The longer the pass, the greater the "lead," and the higher the nose of the ball needs to be.  Too long of a step will produce an underthrown ball.

Finally, a quarterback should snap his wrist forward in a "whipping motion," allowing the ball to "roll off" the fingers with the little finger ahead.  This action produces the all-important spiral. 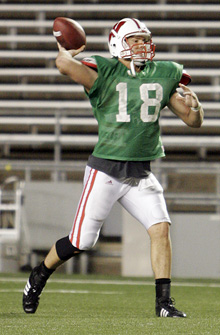 Dustin Sherer prepares to snap his wrist on a release during practice drills.

But watch out, it's important not to put too much spiral on a mid-range pass.  (See Terrelle Pryor).  As a general rule, the closer the pass (short-outs, slants), the more spiral that should be applied to avoid intervening defenders.

That's all for now.  Later this week, we'll use this profile to critique various Big Ten passers.