Stepping out of the modern cinder block fortress that is the University of Phoenix Stadium into an unseasonably cool January night, Buckeye fans didn't know quite how to feel.  On one hand, there was the letdown.  After a Hollywood caliber comeback -- complete with a trick 2-point conversion play worthy of the Fiesta Bowl -- Ohio State had again dropped to a marquis opponent, this time off a 26-yard pass, with a scant 16 seconds on the clock.

Yet, in all categories but one, the night was a success.  The underdog Buffaloes had out-powered (and out classed) a national championship contender -- holding a Heisman runner-up quarterback and a previously explosive offense to 24 points, and stomping out the fireworks in Glendale. 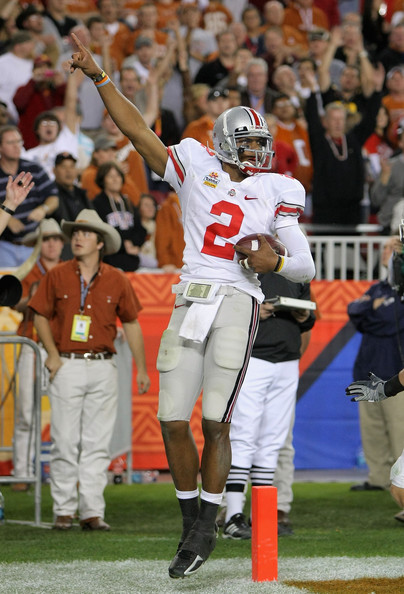 Ohio State benefited from creative coaching in the Fiesta Bowl.  Will the team continue to innovate?

In the competitive arena of sports, there is no such thing as a moral victory, although, in the wake of back-to-back national championship losses, this year's Fiesta Bowl was a fitting sendoff to a vaulted class of seniors.

Still, there are no points for almost, and modest gains in hunger won't cut it for a club haunted by the ghosts of three consecutive BCS bowl losses, and the indignation of nation hungry for scapegoats.  Will the new class exercise Columbus' demons, or will an underwhelming offensive line again sandbag the scarlet attack?

To maintain momentum in 2009, Ohio State must:

1. Develop a reliable, quick-strike short-range passing game, rebalancing a go-cart offense that was embarassingly predictible for most of 2008.  Look for a new pass offense to utilize tight ends, and for three to four reliable receivers to step up.

2. Make significant strides on the offensive line, a unit that has rarely stood out on Tressel's watch.  Although Terrelle Pryor has the talent to circumvent a collapsing pocket, a lame front will prevent Ohio State from establishing its bread-and-butter north/south ground game.  Pass-protection will be the difference between explosion and implosion, although (if the Spring Scrimmage was any indication) Tressel seems ready to use the roll-out to "patch" the front five. 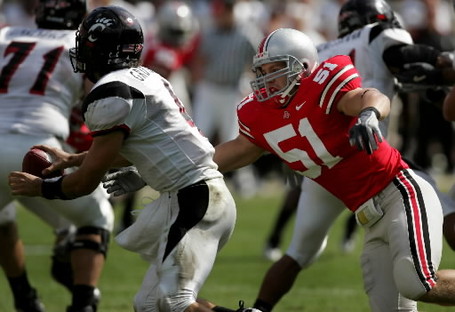 3. Shore up its defensive midfield.  New linebackers need to quickly step into their roles to support an experienced defensive line, and keep pressure off a budding secondary.

Let's take a closer look at both sides of the ball:

The 2009 Ohio State Spring Football Media Guide provides a solid outlook of the new face of the scarlet:

[A]ll-conference strong safety Kurt Coleman (78 tackles, 4 interceptions) and free safety Anderson Russell (67 tackles, 2 interceptions) will be the senior leaders of the secondary.  Junior Chimdi Chekwa (30 tackles, 4 passes broken up) is a returning starter at cornerback, the position that lost Thorpe Award winner Malcolm Jenkins and Donald Washington to the NFL.  Andre Amos, Aaron Gant, Jermaie Hines and Devon Torrence are among the returning lettermen contending for a more productive role among the defensive backs.

The Spring Game showed that, although littered with returning starters, Ohio State's secondary is all break and no bend.  As WWAHT describes, "The safeties were solid in the typical soft zone approach Heacock takes; when asked to make a tackle, they did. But it became obvious as the game went along that the backfield is a little thin."

The good news is up front:

Sure, it's not exactly comparing apples to apples.  But in both the jersey scrimmage and spring game the defensive front has positively dominated the line of scrimmage.  Still, the line has had trouble stopping power running backs in the hole. (It's never a good sign when a senior walk-on breaks out a 94-yard carry).

Although to a television audience young linebacker play isn't nearly as glaring as a bad secondary, it's just as important to maintaining a balanced run/pass defense.  This is where the Ohio State defense is most inexperienced, and needs to gain summer confidence.

It almost goes without saying that the new Buckeye attack has the benefit of arguably the most versitle athlete in the game behind center.  Still, Terrelle Pryor won't be able to get by on good looks alone in 2009.  Last year's numbers (best in Big Ten passing efficiency, 1,311 yards, 12 touchdowns) are misleading: Pryor was rarely asked to make difficult throws, instead nursing his "sidewinder" stance on short completions.

In order to develop the attack Pryor will be expected to use the offseason to make significant gains in his footwork, hip rotation, and arm motion.  The early results look good.  As I wrote about his Spring Game performance:

Standing firm in the backfield, Pryor routinely relied on his legs to evade pocket collapses, before planting his feet, turning on his hips, and delivering surprisingly sharp spirals to a number of incipient targets, like Taurian Washington (4 catches, 92 yards, 1 TD), who pulled in a 44-yard touchdown completion.

In just two quarters of play Pryor was 13-18 racking up a career high 191 yards in the air for the Gray.  Sure, it was against a mixed first and second string defense, but his progress can't be discounted.

Still, an air attack is only as good as the players on both ends of the line.  The departure of an underutilized, but ambivilent crop of receivers leaves a giant hole at the position.  Junior Dane Sanzenbacher (21 catches, 272 yards, 1 TD) is expected to make gains in 2009.

Senior Ray Small (18 catches, 149 yards), the once valuted successer to Ted Ginn Jr. has strugged to establish himself at the college level.  Still, he looked solid in the spring game, and appeared to fall into a natural rhythm with Pryor.

Meanwhile, true Sophomores DeVier Posey and Lamarr Thomas are fast devils -- either of which could be a serious deep ball threat, if they can run solid routes and develop good body control.

Returning Sophomore Dan "Boom" Herron, and 2007 standout Brandon Saine will share carries in a lateral running scheme -- although, if Saine continues to develop, expect him to jump into a 30 carry a game role, a la Beanie Wells. 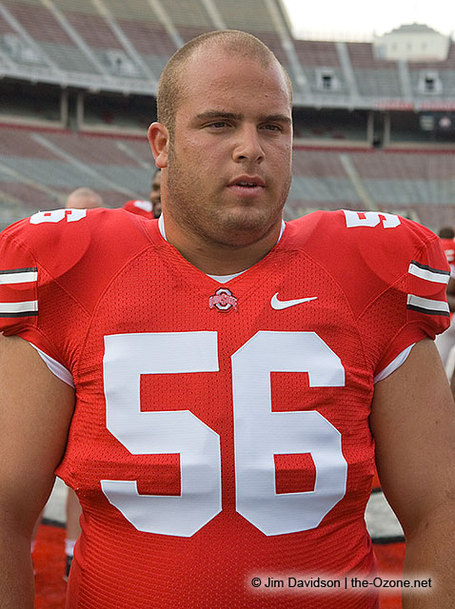 Up front, the team returns three starters Senior Jim Cordle, Junior Bryant Browning, and Sophomore Mike Brewster, although the experience factor here is a bit misleading, since position changes have taken the line's cohesion back to day one.

To save itself, this talented but flat crop needs to match the energy and intensity of transfer Justin Boren, the team's self-proclaimed "skull crusher."  Also stepping up is Sophomore Mike Adams.

Terrelle Pryor has the speed and natural evasiveness to counterbalance a weak front five, but a truly sound offense depends on this bunch getting it together.

Rivalry Comment: Everyone is talking about September 12th, but I think we ought to set our fan sights on an extremely interesting season opener versus Navy.  The Midshipmen will bring a unique ground option game to Columbus, along with a level of core competitiveness rarely seen in an opener.  If the Buckeyes aren't fundamentally set, they're in for a rude awakening.

Must Win: vs. USC (Sept. 12th).  For the second year in a row this is a no brainer.  Ohio State needs an (unlikely) win here to stop a troubling four-game slide against elite competition (Florida, LSU, USC, Texas).  The Trojans are the premiere club in college football at present, but will enter a hostile road environment with a green quarterback.  Can the Buckeyes keep it competitive?

Esquire Rating: 4 out of 5 Cigars: