At last year's University of Michigan season opener, I felt like I was at the epicenter of the college football world. Although this was a bit of football ethnocentrism, I did know that all eyes were watching Rich Rodriguez's offense, wondering how his run based shotgun spread would look in the Big House. We quickly knew the answer - not good. But Rodriguez was saddled with players unfit for his scheme, especially at quarterback. In 2009, barring any miracles from now until August, it looks like the quarterback of this intriguing offense is freshman Tate Forcier, a 4 star recruit from California, who already looks like a major upgrade from 2008. Let's look at his throwing mechanics, using mostly Spring Game tape (thats about 14 throws worth so...) and some high school tape. 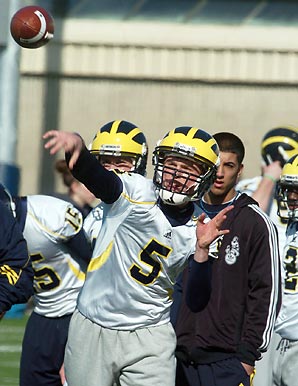