Biggest disappointment from last year's Big 10 season? Not Michigan or Juice Williams, but the struggles of the highly hyped Wisconsin Badgers, a preseason top 10 team that lost 5 conference games, almost fell to Cal Poly, and was blown out in the Champs Sports. Quarterback play failed to be a steadying influence on the offensive side of the ball, allowing defenses to stack the line against John Clay and PJ Hill.
Wisconsin had had a nice streak of quarterbacks who weren't just play action machines, but who put up excellent stats in the run-focused offense of Barry Alvarez and then Bret Bielema. Brooks Bollinger (NFL backup), Jim Sorgi (clipboard holder for Peyton Manning), John Stocco, Tyler Donovan...And then 2008 happened, with a horrendous senior Allan Evridge proving ineffective against the meat of Wisconsins schedule. He was replaced mid-season by Dustin Sherer, who won big games versus Illinois and Minnesota. Let's take a look at the mechanics of the expected starter for the 2009 Badgers squad. 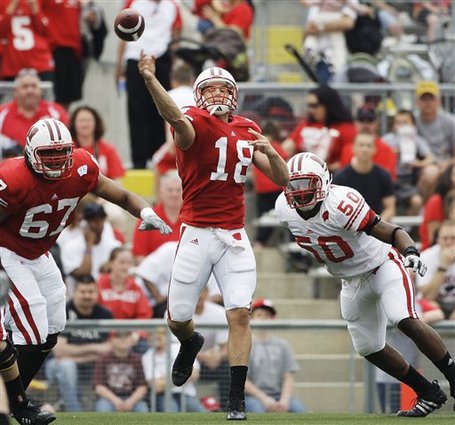