Three short weeks ago, we took things in a new direction by debuting an "elements" series on the site.  The result: Evaluating the Mechanics of Big Ten Quarterbacks.  Ten profiles later*, we're ready for our sophomore effort.  Let's take a look at the bread and butter of offensive happenings -- the founding fundamentals of the ground game.

It's time to survey the running backs.

Before we get started, let's get one thing straight: this isn't your usual crop of backfield bruisers.  Departed are five of the Big Ten's top ten rushers from 2008.  Greene, Ringer, Wells, Sheets, and Thigpen are gone.  In their place are talented but untested hopefuls.

As a result, we'll keep this series on a "what have you done for me lately?" level.  Using spring practice film, and recent metrics we'll see if any of these young souls has what it takes to play savior in a land where of Three Yards and a Cloud of Dust still reigns supreme.  Like before, we'll ignore statistics, and focus only on fundamentals.

* Yeah, we know.  We skipped Michigan State on purpose.  After making a good-faith effort, we concluded that there just wasn't enough film on either Keith Nichol or Kirk Cousins to complete a balanced evaluation.  Accordingly, both fall into the TBD category. 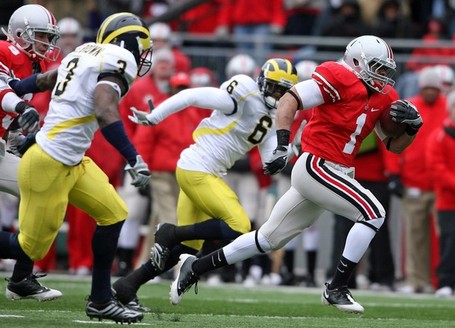 But first, we'll need a profile.  So like before, let's address another deceptively simple question: what does a good runner look like?

As McCarthy tells us, "Many people seem to feel that the glory of football is found at the running back position...The running backs put the numbers up...[t]hey get hit...hard...buck[ing] the line with a full and reckless abandon."

The runner needs to be able to seamlessly move in any direction in the simplest way possible.  Good backs start in a "ready" position - feet spread wide, palms on knees, and eyes beamed forward.  Some stay up, for visibility -- others drop into a "set" position, sacrificing a birds eye view for pure speed.

To facilitate lateral movement, backs keep their legs spread -- the inside foot back slightly for balance.  The inside hand is straight down.  Again, this maintains balance.  "The body is tense, coiled and ready to spring.  The toes are straight ahead, or even pointed outward a bit since the push comes from the inside front or balls of the feet."  (McCarthy, p. 49).

One thing that cannot be understated is the importance of getting into the same stance every time.  Defenses are trained to look for indications of a back's disposition.  Angle in -- it's a dive.  Turn out -- it's a sweep.  Do either: it's a tackle for a loss.

A good back pivots towards the hole before taking his first step.  This orients his momentum, and saves precious time.  The head and shoulder move simultaneously with a push off the opposite foot.

The step comes naturally, a large push off the leading foot.  "The idea is to take off low, stay low, and...build up speed with strong churning arm movement."  (McCarthy, p. 51).

"A running back should not worry about the quarterback.  The quarterback's job is to get the ball to the runner safely.  The runner must look at the gap he will run through."  (McCarthy, p. 51). 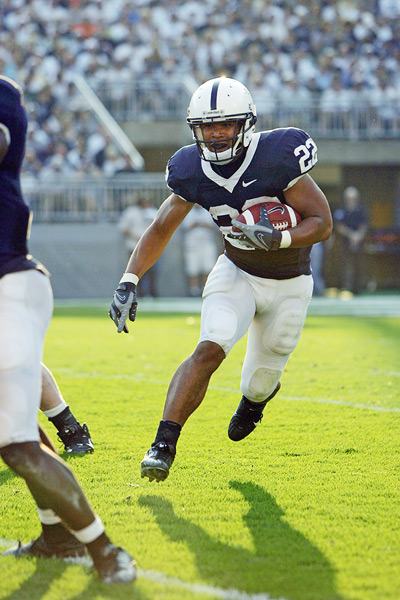 Here we're looking for cover and security.  Both hands should be curled around the ends of the ball in a muscular fashion.  Cuddle the carry, and the ball will launch at the first tackle attempt.  To protect against a fumble, solid backs "jam the point of the ball into the pocket between the upper arm and ribs, just below the armpit."  (McCarthy, p. 51).  The forearm then traces the length of the ball -- the fingers spread to the interior, providing a horizontal buttress.

"Now it's time to get yardage.  The single focus of the running back must be to get as much yardage as possible.  He doesn't worry about the tackler; he looks...for daylight."  (McCarthy, p. 52).  The best backs avoid the shoulders of would-be tacklers.  They run through outstretched arms, maneuvering in short controlled bursts of energy -- never letting the body become disjointed from the legs.

They drive, fall-forward, and lunge.  Stiff-arm, step out, and crossover.

That's all for now.  You know the drill.  Later this week we'll use this profile to critique various Big Ten rushers.