Share All sharing options for: 80 Reasons to Love the Big Ten - No. 79 - Big Ass Turkey Leg 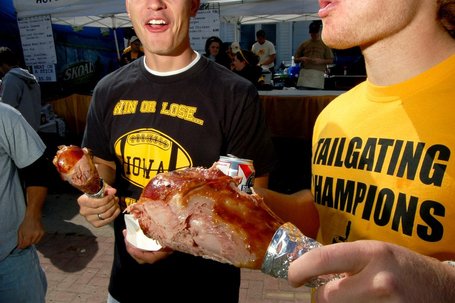 In Iowa City, brisket is for pansies.  Bar-B-Que is for Curly Cues.  That's because there's Chucky.  The man who sells the famous Big Ass Turkey Legs on Melrose Avenue outside Kinnick Stadium.  The cost?  $5.

Sure you can play, but can you tailgate?  As an uninitiated mother tells the tale:

"I knew that large colleges played football and that it seemed to involve bare-chested guys in freezing weather and beer, but that was about as far as it went.

That was before Iowa.

Before last weekend, I didn’t know that in Iowa, people got up before dawn to head out for tailgating.

I didn’t know that people parked RVs in lots, set up big-screen TVs and spent the entire day cooking, eating and drinking.