Three Yards and a Cloud of Rubberized Pellets

I like Wisconsin football. I really do. In so many ways, the Badgers have become the Big Ten's flagship institution. Let me clarify. As I've written extensively, this is still the Buckeyes' and Wolverines' league. But when the rest of the country talks about Big Ten football, they think of power. Slow, plodding power. Slow, plodding, corn-fed, dairy-fed power. And while every other team in the league has at least flirted with opening up their offensive systems, Wisconsin has not. Since the day that Barry Alvarez followed the Hayden Fry blueprint to rejuvenate a dormant program, the focus has been on running the ball and stopping the run. When it's been effective, the Badgers could beat anyone in the country. When it hasn't been, the Badgers have looked bad. Really bad.

But what will we see from the Badgers in 2009?  Let's start somewhere different. 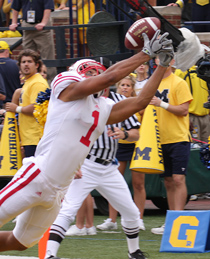 If you were to pick a pair of Big Ten wide receivers in the NFL, you could do a lot worse than to take Lee Evans and Chris Chambers.  These two Wisconsin alumni were crucial for the success of their Badger teams.  Both stretched the defense, and forced the safeties to play something closer to an honest defense.  That opened up holes for the running game.  When the offense has stagnated, it's most often been because the 8th or 9th man in the box has been able to hold the tailbacks to two yards or less.  Wisconsin doesn't need big numbers from the passing game, but it does need enough of a threat to open holes.

Can we all agree that putting the 10th man in the box (count 'em) was a mistake?

That's where Nick Toon comes in.  Son of former Badger and NY Jets WR Al Toon, Nick showed some potential in the second half of last season.  Reports from Spring ball were that he seemed poised to take the next step.  If the Sophomore can develop a connection with Senior QB Dustin Sherer, and if David Gilreath takes another step forward, it may mean that the running lanes open up.  That will benefit...

Meet the next in the long line of Wisconsin running backs.  John Clay was very highly regarded coming out of high school (Rivals had him as the 4th best running back), and he did not disappoint while spotting PJ Hill.  Now that PJ has moved on to the NFL (he signed as an UFA with the New Orleans Saints), it's Clay's world.  This has Badger fans very excited, because Clay has all of Hill's power and much more speed. 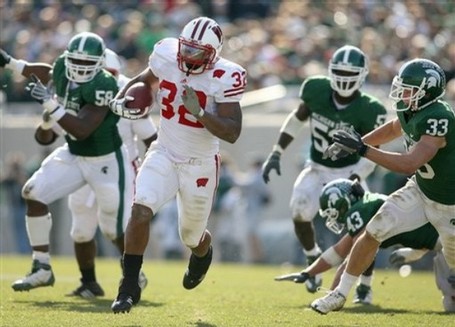 Don't get in front of this.

If Clay can produce at a level greater than Hill's production last year (5.1 yards per carry; 13 TD), there will be good times in Madison.

OK Armchair D-Coordinator, which of these stats worries you the most?

Here's a hint.
Look at the 1:54, 3:10, and 6:04 marks
If Wisconsin can't stop the run, their defense will not succeed.  It may not be realistic to hope for a 2.7 ypc performance like the 1998 Rose Bowl team had, but improvement is mandatory.  If not, the other horrible statistics from the 2008 Badger defense will reappear.  It's hard to judge too much off of Spring scrimmages, but early returns were good...for the Badger offense.  Not so much for the Badger defense.   It says here, the Wisconsin offense will be good enough for a run to one of the Top Three Bowls.  The Badgers defense will prevent that from happening.

While Fresno State may be frisky, Wisconsin should (read: better) run through their three non-con games without a blemish.  The conference schedule is ridiculously front-loaded, though.  If the Badgers want to have any chance at competing for a Big Ten title, they cannot lose their opener.  Trips to Minnesota and Columbus, followed by a Hawkeye visit make a 1-3 Big Ten record a real possibility.  Starting with a Spartan loss may well make it a reality.

This is Year 4 of the Brett Bielema era.  His first three years amounted to a .718 winning percentage.  That's good.  His teams have gotten worse each of his three years.  That's not.  It's probably not realistic to expect a conference title out of this squad, but another season of 7-5 may indicate that Wisconsin has moved down a couple of notches in the Big Ten pecking order.  Anything less than 8-4, and Bielema enters 2010 on a very hot seat.