The Hype and the Players

I had no idea Tom Brady would end up as the face of American football, but in 1999 I knew that a) #8  Michigan was throwing more than ever in my short lifetime and b) the man behind all those attempts threw a damn good ball. Supported by veterans like Rob Renes, Steve Hutchinson, and David Teeeeerrell (if you don't know the infamous David Terrell dorm party story, you are probably better off), this would have been a national championship team if not for two mid-season losses to Michigan State and Illinois. Lloyd Carr defeated ND, Penn State, and Ohio State...and then found ways to lose to Illinois and MSU. A weird season overall, but another victory over John Cooper's Bucks found the Maize and Blue in the 2000 Orange Bowl against a loaded Alabama Crimson Tide squad.

The SEC champion and fifth ranked Crimson Tide, fresh off victories over Florida and Auburn, relied heavily on running back Shaun Alexander and a defense that had steadily improved over the year. The only thing slowing the dominant Alexander was a mid-season ankle injury and it seemed he was at full strength when the Orange Bowl rolled around. If you stopped Alexander, coach Mike Dubose would turn to play action with quarterback Andrew Zow, a somewhat forgettable signalcaller who was steady, but definitely unspectacular throughout the season.

Two of the elite programs in college football, some future NFL offensive superstars, no dominant defenses...I think we all knew where this was going.

The Wolverines looked overmatched early, as Alabama's aggressive defense teed off on Michigan receivers and the slow Brady. Remember, this was a Michigan team running out of the Shotgun primarily, and the 'Bama defenders blitzed early and often, not fearing the running game or Anthony Thomas. A couple of stops and two methodical drives punctuated by Alexander touchdowns put Carr's squad in a 14-0 hole. 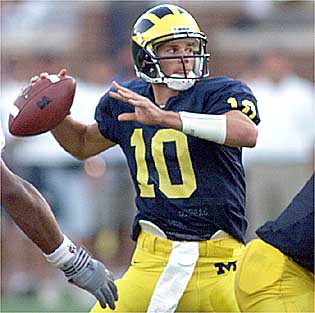 David Terrell, soon to be a huge NFL bust, had prospered under the new pass happy Michigan offense, catching 60 balls for almost 1000 yards during the season. He was a hugely important part of the passing game, using great hands to catch comeback routes in traffic and quickness to get open against anyone. After running a perfect seam route for a touchdown catch before the half, Terrell began to take over the game from his wide receiver position in the third quarter.

Game Recap: Second Half and OT

The third quarter was one of the best periods of football I've ever watched. Terrell couldn't be stopped - the 'Bama defensive backs consistently whiffed when trying to tackle him and Terrell got separation on any of the DB's assigned to cover him. The statistics say it well enough: 35 points (an Orange Bowl record), a scintilating Freddie Milons punt return for a TD, two more Terrell touchdowns, another Alexander touchdown on a run where he ran over and through the Michigan defense. The game began to resemble the late rounds of a boxing match as each team threw their best punches, trying desperately to finish the other with a knockout blow. At the end of the quarter, the game was all knotted up at 28.

Michigan had come back from two 14 point deficits, nothing new for a team that played 9 games decided by a touchdown or less. This game would not be any different. Brady sat back behind another great Michigan offensive line and picked apart the weary 'Bama secondary. And just when you thought Michigan would take the lead, they inexplicably blew opportunities. A-Train Anthony Thomas fumbled while diving into the endzone, wasting one of the best catches of the year, a falling back stretched out leap by Marquise Walker at the Alabama 2. Then Carr, who had abandoned the run by now, decided to put the ball in Brady's hands with two minutes left and 40 yards to get into field goal range. Brady cooly drove the Wolverines down the field with dump offs to his tight end Aaron Shea and darts to his wide receivers. A last second field goal try from Hayden Epstein was blocked, sending the game into overtime.

The Wolverines scored on the first play of OT and Zow countered with a TD pass on a rollout to tie the ga....Oh wait a minute. Alabama's kicker, Ryan Pflugner, blew the extra point right and the Wolverines had secured themselves a huge comeback victory.

Brady: An impressive 369 yards passing from the future Mr. Bundchen; showed his penchant for tossing perfect spirals when given time to throw.

Whoops: Alabama was ranked #3 to start the next season and somehow ended up 3-8, including losses to Southern Miss and Central Florida.

At Least We Can Beat the SEC: Since 1990, Michigan has went 6-2 against the SEC, with victories over Mississippi, Florida twice, Auburn, Alabama, and Arkansas.

Here are the countdown games so far...