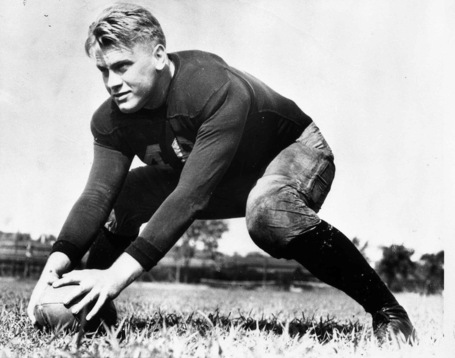 Before he was the 38th President of the United States, Gerald Ford was a Wolverine.  Alternating between center and linebacker, Ford led the maize and blue to two national titles in 1932 and 1933.  He tackled Heisman recipient Jay Berwanger, and as Wikipedia reports:

Ford retained his interest in football and his alma mater throughout life, occasionally attending games and on one occasion asking to be awakened to find out the score of a Michigan-Ohio State football game, while attending a summit in the Soviet Union as President.[19] Ford often had the Naval band play the University of Michigan fight song, The Victors, prior to state events instead of Hail to the Chief.[20] He also selected the song to be played during his funeral procession at the U.S. Capitol.[21] On his death in December 2006, the University of Michigan Marching Band played the fight song for him one final time, for his last ride from the Gerald R. Ford Airport in Grand Rapids, Michigan. 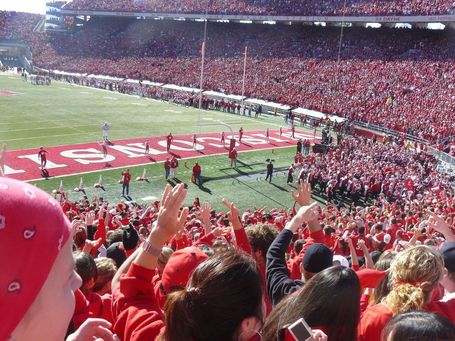 Wisconsin's Camp Randall Stadium is a House of Rain that loves House of Pain.  This decade old tradition -- consummated between the third and fourth quarter of every home game -- sends the stadium skipping, after the first notes of the smash hit single flood the risers.

You can't really appreciate this one unless you've been there.  It's a seismic experience that's second to none. 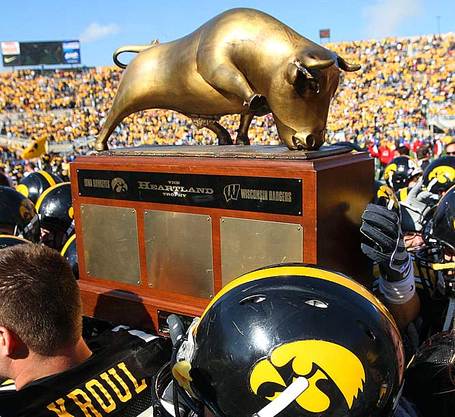 Tight doesn't begin to espouse the series record between rivals Iowa and Wisconsin in the battle for the Heartland Trophy.  These foes are currently flush, despite Wisconsin's having lost 18 in a row to the Hawkeyes between 1977-1996.

The next meeting between the schools is slated for October 17th in Madison.  Naturally, the winner gets big time bragging rights.