Because this offense can be so sexy. Why do I love the RichRod Spread? It's different - we're not used to seeing fullback dives utilized effectively or the option attack at a major school. Last year's struggles were well documented as the Wolverines possessed the Big 10's worst offense...(And if you need slightly more detail about the horror, here's an early season assessment)

Tate Forcier's Spring Game performance shows an 18 year old who is more confident and prepared than anyone who called signals for the Wolverines in 2008 and as most everyone in the blogosphere believes, a decent quarterback will make a 100% improvement to the Spread scheme. One thing to mention - the players at West Virginia were no scrubs. Pat White just got drafted in the second round of the NFL Draft, Steve Slaton is a starting halfback for the Houston Texans, Owen Schmitt will start at fullback for the Seattle Seahawks this year...So yeah, the system worked, but the skill players were exceptional. Running back Brandon Minor looks to be a stud in the making, while the WR's weren't given enough substantive opportunites to show their skill last year.

#7 - I want Iowa fans to alienate another Big 10 fanbase 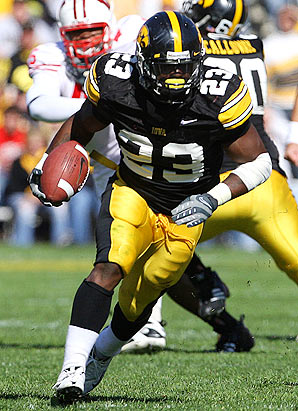 That's just me, running your ass over...

Originally my money was on Wisconsin. All the signs are there. Not only do Badger take their football way too seriously, the state is full of decent, loyal, down to earth humans who won't be able to put up with the vile insults if Iowa wins this year in Madison. But BHGP rebuffed that idea...so I guess we will see which lucky Big 10 school gets pulled into a yearlong scuffle full of mesage board attacks and "55-0"ish insults by those incendiary Iowa fans. Nothing like a good ol' rivalry started out of thin air.

#6 - I want Northwestern to sell out Ryan Field

LTP brought this up over and over, as does every Northwestern hater, but it's sad to see 30k people attend Ryan field for a team that will be ranked in the Top 20 this year. We all know the reasons for the lack of fans (smaller school, students are from all over the country, not a huge Chicago fan base, more of an academic tradition). Will another 9 or 10 win season begin pulling the masses in? Do the masses exist?

First, every conference had their ups and downs last year. The Big 12 spent the entire year being feted before people discovered Big 12 defenses were less than solid. The SEC's 2008 rep was salvaged with a 5-2 bowl record, not to mention big bowl wins over Texas Tech and Georgia Tech. But disappointing regular seasons by Georgia and Auburn showed a SEC lacking the depth we've become accustomed to.

Second, it's such a passe statement/argument to make because frankly, arguing over conference supremacy is a product of the screwed up BCS system anyways. Sure, it's a recruiting tool and a handy argument to pull out when visiting friends in other parts of the country...And it makes for editorial filling space when a Big 10 team shows up undefeated in the middle of the season, just in time for idiot columnists pull their tired cliches out of the bag. But it's worthless. Win your conference, win your out of conference games, welcome to the National Championship game. Except Boise State or Utah. Sorry.