Football Outside of the Big Ten - The MAC

Share All sharing options for: Football Outside of the Big Ten - The MAC 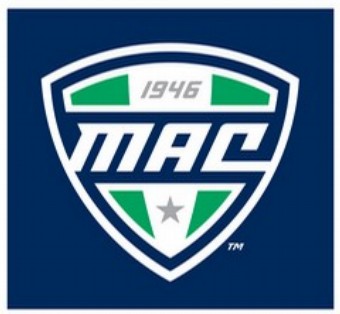 I'm still not used to the new logo.

From time to time, it's important to look outside the Big Ten and remind ourselves that there is football being played by other teams in other conferences.  The Rivalry, Esq. continues its look at those other conferences with a glance at the Big Ten's little brother: the Mid-American Conference.  Little brother seems to manage at least one upset over the Big Ten each year (and FOUR last year).  Whose number will be up in 2009?

The Buffalo Bulls won the Eastern Division with a 5-3 record.  The Ball State Cardinals won the Western Division, going an unblemished 12-0 (8-0).  The Bulls ended Ball State's unbeaten season with a 42-24 victory in the MAC Championship game. 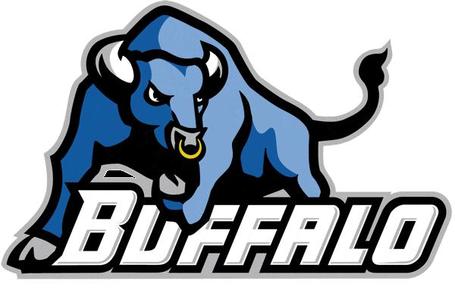 Obviously, Buffalo ending Ball State's unbeaten season was huge.  It also put the capstone on the incredible building job that Turner Gill performed (can't call it re-building if it was never built to begin with, can you?).  Buffalo was one of the three worst teams of the first half of the decade.  To win the league and go bowling was an accomplishment of monumental proportions.

Ball State also played in a great Wednesday night game to conclude their season.  The Cardinals managed a 31-24 victory over CMU in the snow.  That game clinched the Cardinals division title. 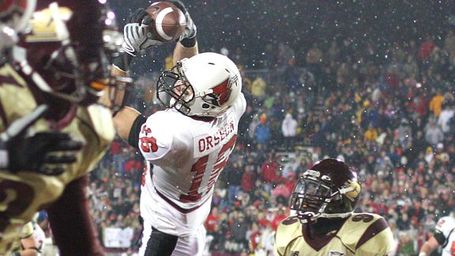 The best of the bad weather games didn't involve snow, but rain.  On September 6, 2008, UConn visited Philadelphia to face off against Temple.  A driving rain started about 10 minutes before kickoff and continued for the next four hours.  The game was ugly.  The game was beautiful.  It's all in the eyes of the beholder.  The Huskies won 12-9 in overtime.

This was a relatively down year for the MAC as September ended.  In ten games, the conference had managed only one victory against the Big Ten - and that was against the team that was obviously the worst in the league.  And then, the Toledo Rockets did something that no MAC team had ever - EVER - done before.  They knocked off Michigan.   The two wins over Indiana were nice.  And Western MIchigan's victory at Ford Field over the Illini was a nice win (one that would end up sending Northern Illinois to a bowl game instead of Illinois), but Michigan.  MICHIGAN.  Yes,  MICHIGAN!  That was the game that made for a memorable MAC season. 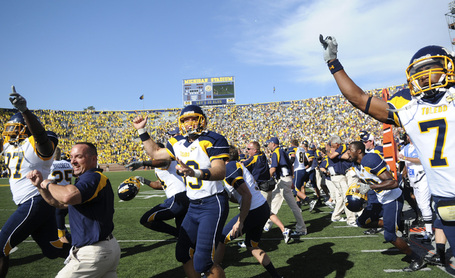 We can confirm that these are the ugliest blue and gold uniforms to ever win at the Big House. 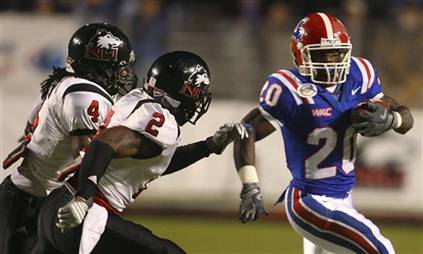 At least you got to see Shreveport, men.

Obviously, many of the games of note for the MAC will be against the Big Ten.  Those games are listed below.  Here are a half dozen games that the MAC teams could win and get some nice things said about the league.  If it's a good year for the league, they beat Troy and two other teams.  An average year would mean Troy and one BCS team.  A bad year would be crapping out on all six contests.

Only one true home game for the MAC, but it does make Akron's game against Indiana a distinct possibility for a victory.   While it may be 25 miles closer to Cleveland, I somehow feel Toledo will be outnumbered in the stands at the Browns' Field.

While the MAC keeps the same three bowl affiliations for 2009,  there is one change.  The GMAC Bowl will no longer pit a MAC team against a member of Conference USA.  Instead, it will be a showdown against the 9th ACC Selection.  This is a win for both conferences.  The MAC gets a shot at a bigger scalp, and an ACC team travels to Mobile instead of Boise.

For the second straight year, the balance of power in the league will tip west.  I don't see Ball State repeating as division champion - I think that the losses of Coach Brady Hoke and QB Nate Davis will prevent that from happening.  I see the Western Division decided by the October 17 matchup, Central Michigan @ Western Michigan.  It says here  that the Chippewas walk out of Kalamazoo with a win.  The CMU offense should be strong, with Dan LeFevour, the wide receiver corps, and three of the linemen returning.  If the defense can match last year's level, the team looks ready to go.

Out east, Buffalo returns enough from their championship squad (including shockingly, Coach Turner Gill) to be declared the pre-season favorite.  Frankly, I don't see the Bulls repeating.  I declare the East wide open, and think that a 6-2 or 5-3 team will win the division.  I like Kent State as a potential sleeper, but I'm picking Temple.  Seriously, did I just write that?  Sure, why not?  Al Golden has the team pointed in the right direction, and if Buffalo can win the crown, why not the Owls?

In the end, though, the west will best the East.

If you're looking to pick games for this year, I'd look to Indiana again.  I bet they drop one of their two MAC matchups.

The MAC has slid extra teams into bowl games over the past couple of seasons, and I'm guessing that they do it again.  I'll guess that Central Michigan stays in Detroit to play a Big Ten team.  I can see Temple going to the International Bowl.  I'll take Western Michigan traveling to Mobile for the GMAC.  And let's guess that Kent State slips into some bowl that can't fill it's assigned slot.

No.  If someone can run the table, they'll have a shot at a BCS Bowl, but even that will take a perfect storm.

This will be a question posed to one of the site's founders that relates the conference at hand with the Big Ten.   This week, Graham Filler does the honor.

Michigan lost to a MAC school for the first time ever last year. It sucks, doesn't it? If you could go back in time and give the 2008 Wolverines one extra win, would you prefer it be against Notre Dame or Toledo (I'm not asking Ohio State - that's too easy)?

Notre Dame. No question. 3 main reasons: A win over Notre Dame (considering we beat Wisconsin), makes us 3-1 at the start of the year and would have given some hope, no matter how fleeting that hope was. Our 2008 record wasn't going to be great anyways, we might as well have saved some face by beating hated Notre Dame and Jimmy Clausen's hair. The worst part of 2008 is this: We lost our 4 most important games: ND, MSU, OSU, PSU all by double digits. Not only are those L's, those are "turn the game off in the 3rd quarter" losses...sigh.

So losing the ability to say "Michigan has never lost to a MAC school" didn't mean anything?

You know that patented Michigan arrogance? Arrogance doesn't usually pay attention to what the scrubs are doing. Losing to Toledo simply reinforced the fact that 2008 didn't really "count"...I'm sure the snobbiest of the snobby UM fans loved hating on MAC people for "trying hard" but never succeeding...but the rest of us kind of accepted that 2008 was an aberration and would like to get back to competing against our rivals, something we didn't do in '08.