In law, there are standards and tests that legislation or crimes are held up to determine their validity. The reasonable person standard, foreseeability of harm, etc. The above title is my standard for this years Rivalry showdown in Ann Arbor. I'm not asking for a victory or a close game. I just want to believe, for a brief second before kickoff, that Michigan can pull off an upset. Because that's what a rivalry game is about, right? "Throw out the records"..."Anything can happen"...etc...But I haven't truly believed that; even in 2006 when Michigan was undefeated and the apocalypseNOWundefeatedholyshit#1v2BO IS WATCHING FROM HEAVEN game was upon us...Michigan was injured and listless in '07 and in '08, yeah right.

Good god, 2008 was a fantastic year for Sportscenter-level smashing. Shonn Greene, crushing defenders all year, especially here at the 0:13 mark (listen to the lady say OMYGOD). Shonn Greene visiting lala land at the 2:20 mark. Sam McGuffie being told by Ohio State's kickoff team that, um yeahh, maybe you should probably not play in the Big 10 (2:22 mark). Terrelle Pryor and Chris Wells stiff arming the hell out of the entire Michigan State defense. Brian Hoyer leaving the same game due to fogginess from this hit at 5:05. Brian Hoyer getting face punched against Penn State. 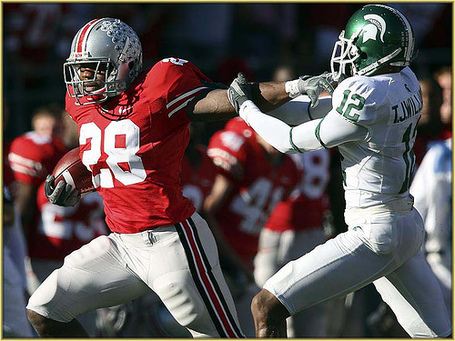 Every time I turned around, someone was getting lit up. Who will be the killers this year?

See Part 1, Part 2....and the final installment coming next week...