Football Outside of the Big Ten - The Independents

Share All sharing options for: Football Outside of the Big Ten - The Independents

From time to time, it's important to look outside the Big Ten and remind ourselves that there is football being played by other teams in other conferences non-affiliated FBS stadiums.  The Rivalry, Esq. continues its look at those other conferences institutions with a glance at the Independents.  This year, that means focusing on the three last vestiges of rugged American individualism.  Seems appropriate that two of them are service academies.. 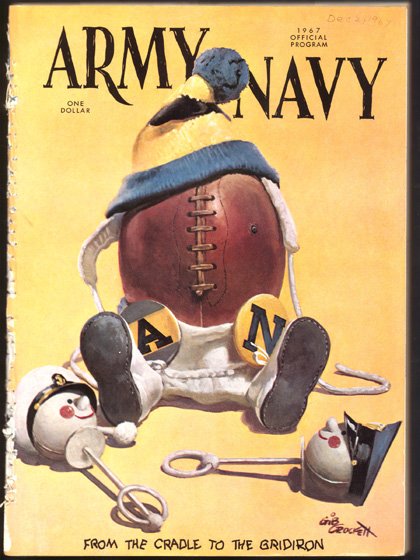 No league for these three teams to win, so you can pick your winner one of three ways: 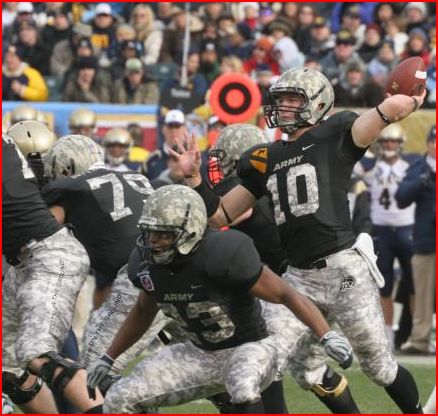 It starts and ends with the Army/Navy game doesn't it?  Navy won 34-0, and the difference between the two teams seemed at least as large as that final score.  That makes the tally favor Navy 72-3 over the past two years and the all-time series favor Navy 53-49-7 -- Navy's largest ever lead in victories.

Navy had a strong September win against Wake Forest in Winston-Salem (more on that later), and also beat the Air Force again to keep the Commander's Cup in Maryland.

Notre Dame beat one of its main rivals, topping Michigan 35-17, but lost to USC, Michigan State, and Boston College.  The up and down season reached its lowest point as a lame-duck Syracuse squad beat the Irish 24-23 on Senior Day in South Bend.  Did I mention that Greg Robinson was coaching Syracuse?  Not good...

Navy agreed to play in the Eagle Bank Bowl in Washington, DC before the season.  They were to be paired with the 7th Choice of the ACC.  You can imagine their joy when they were assigned Wake Forest as an opponent.  There is nothing worse than a repeat of a regular season game in a bowl game.  This should be avoided at all costs.  Navy dropped the rematch 29-19.

Notre Dame traveled to Aloha Stadium to face Hawai'i in the Hawai'i Bowl.  Just to show how times have changed, in 1996, 8-3 Notre Dame turned down bowl invitations, because their season ending loss to USC kept them from earning a prestigious enough bowl bid.  In 2008, Notre Dame over-powered the weaker Warriors, OR Notre Dame showed that it was coming together and a team to watch in 2009.  Opinions differ. 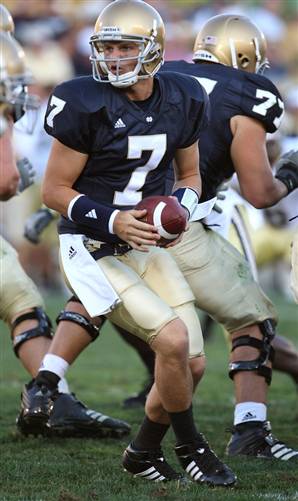 I'm not allowed to show pictures of Mr. Clausen's hair on this site.

Notre Dame faced its three traditional Big Ten Rivals.  The better team was at home in each game.  There were no upsets.  Ho-hum...

Again, it all starts with the Army/Navy game on December 12, 2009.   After that, the games reflect the status of the schools.

USC may be the only game in which Notre Dame is an underdog (maybe MSU too?).  The Notre Dame schedule sounds great.  It is full of traditional football powers and former champions.  But if you start looking at it, the Irish are playing a lot of schools who will end up with 7 wins or less.  It's a great opportunity for a big year.

Army has a schedule that would ensure six wins for most teams.  It could happen for them, but not if they can't beat either Duke or Iowa State.

Navy's schedule isn't that taxing outside of the games against the Irish and Buckeyes.  A win at a rebuilding Pitt could set up a strong season.

Notre Dame plays the usual suspects.  Navy opens the season at Ohio State.  It will be interesting to watch an inexperienced defense face the option.  Will Ohio State have the discipline to stop the rushing attack?  Yes, and the game won't be close.

Army has agreed to play in the Eagle Bank Bowl in DC.  Now they just have to get that pesky sixth win.

Navy has agreed to play in the Texas Bowl in Houston.  The last time they bowled in Houston, this happened.  Not cool.

Notre Dame has their sights set on returning to the BCS.  If a BCS bid doesn't come through, a 7 win or better Notre Dame team will go to the Gator Bowl and face the second non-BCS selection from the ACC.

Again, no real winner here, but I'll venture this guess: Notre Dame beats Navy, who beats Army.  But this year, Notre Dame has the best record of the three schools.

Absolutely one (Purdue).  Should be two (Michigan).  If it's a BCS season for Notre Dame, there will be three (Michigan State).  There won't be four. 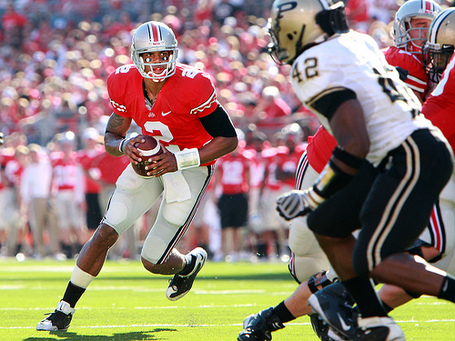 Navy will get their six wins and go to Texas.  I think that Notre Dame will have a huge year.  Anything less than a Gator Bowl and 9-3 is a disappointment.  I see more, though.  I think the Irish will be an at large BCS selection at 10-2.

Absolutely.  Notre Dame has a one game window.  Beat USC and an undefeated or one-loss Notre Dame will be in the discussion.  An 11-1 Notre Dame team, with a loss to USC, probably doesn't have the schedule to make it.

Normally, this is a question posed to one of the site's founders that relates the conference at hand with the Big Ten.  We're focusing more on the acadamies this holiday week.  Graham Filler does the honor.

Do you actually watch the Army/Navy game, and if so, do you root for either squad?

I actually do watch the Army/Navy game, but not the whole damn thing. That would be unnecessary. I will watch about 2 quarters of it, because I love watching throwback rushing offenses. Its also good to see all those cadets in uniform going ape-shit and doing push ups. This game is all about passion and it's fun to watch -- I remember when I visited West Point and they had "Beat Navy" painted in huge block letters in the grass; that's just an impressive spectacle.

Yearly, I root for Army, for the same reason that someone roots for Western Kentucky in the first round of the NCAA Tournament. Army has been getting slaughtered by Navy for the past seven years and inequality in a rivalry isn't fun for anyone, so I'd like to see the sprightly underdog win one.