Share All sharing options for: Plow Horses - The Case Against Penn State

The case against Penn State is based upon an idea that I've had brewing for the better part of two months. Each year, the preseason picks come out with surprising unanimity. Sure, some might have Oklahoma at 2 and others might have Texas at 2, but it's not like there is a pollster who is picking Kentucky to finish in the Top 10. And yet, last year a team coming off a 7-6 season, in the same division as the defending national champion, with a road game at the defending champion, ended up 12-2 and #6 (Alabama). I'm not picking Kentucky to pull that off. But...if all you do is think like the group, all you'll get is the group's answers. Picking which near .500 team will end up in the Top 10 is too tough for my simple mind. Sure, I can see Notre Dame, Colorado, Clemson, North Carolina St., or Minnesota pulling it off, but I wouldn't predict which one (though I listed them in my guess of likelihood).  However, I think that it is safe to predict that a BCS team that finished with 5-7 wins last year will end up in the Top 10 this year.

But picking which team is being overrated - which team is a flop waiting to happen? That seems easier. Last year, I thought that Clemson was being given far too much love as a Top 15/borderline Top 10 team at the start of the season. This wasn't because of a lack of faith in Tommy Bowden. Instead, I looked for my personal recipe for over-ranking: too many show ponies and not enough plow horses. 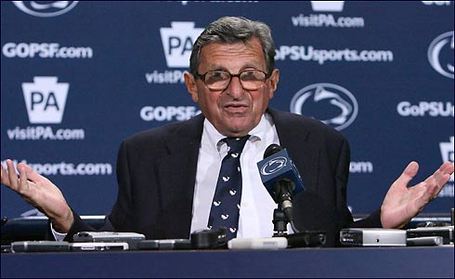 JoePa finds out how this ties in with Penn State after the break...

When I clerked as a summer associate at a large firm in a Big Ten city, I had a wonderful experience working with a labor and employment attorney who handled union negotiations for a number of major employers. One of the things he said stuck with me in my practice, and is relevant here as well. "Some lawyers," he said, "you might think of as show ponies. They look good when you put them in a hearing or in front of a jury. But, they don't win because they're good show ponies. They win because they're better plow horses. For every day that they get to show off how good they are, there are twenty days that no one sees in which they just have to do the dirty work. That's why they win. They win because they're plow horses."

When I see a team that returns its quarterback and skill position players, but loses the offensive line, I immediately think about show ponies and plow horses. On the defense, I look to the front seven to see what's coming back. I don't trust a team that has too many holes there (unless that team has a mascot that rhymes with "Grojans." Until proven differently, these rules do not apply to them.)

Let's look at Clemson in the Summer of 2008. Returning quarterback? Yes. Cullen Harper was a Senior who was second team All-ACC the season before. Returning Skill Players? Yes. There was first team All-ACC RB James Davis, who was backed up by speedster and second team All-ACC RB C.J. Spiller. Throw in four returning starters at WR and TE (Clemson operated out of a three WR formation as its base), and you have a ridiculous amount of talent coming back. Give those pretty looking show ponies a BCS bid!

Or...we can look at their plow horses. The D-Line actually wasn't in too bad of shape, returning three of four. It was the linebackers that were the problem. The lone returning backer was kicked off the team over the summer. That meant four new faces in the front seven. Not great, but not awful. No, the awful part was on the other side of the ball - four new starters for a line that had problems the year before. None of the starters were seniors. That's a huge red flag. Where are the experienced plow horses?  Send them to a lower-tier bowl! 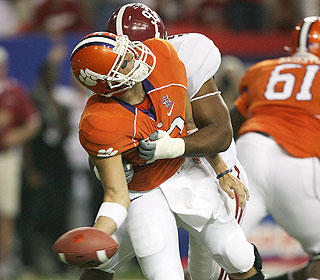 You'll notice Clemson's Offensive Line in the background.  It's busy not blocking.

Sure, the truth (due to a fantastic fan base) is somewhere in between, but here's the thing. Experience matters, but it matters in some places more than others. The three positions where it matters most are at QB, OL and D-Front Seven. I can only offer my reasoning as to why. Quarterbacks and linebackers are thinking positions. The more you've seen in-game conditions, the more prepared you are to properly react. The O-Line and D-Line require size and repetition. By nature, a man will grow bigger and stronger between the ages of 20 and 22 (and if a lineman doesn't, that's the strength coach's issue). More than that, a Sophomore isn't going to have the repetitions and experience that the Senior will.

So let's look at Penn State.

Defensive Front Seven: Depending on how you count it, you either have three or four starters returning. The linebacking corps will be very good, but the rush ends, including first round draft pick Aaron Maybin, need to be replaced. I feel compelled to mention that the front seven better quickly learn how to get good pressure, because the ENTIRE secondary will be new. That's seven or eight new starters on the defensive side of the ball. That would make me nervous.

Offensive Line: Last year's offensive line had three All-Big Ten selections. It was the best line in the Big Ten and one of the best at Penn State in the last twenty years. They're gone. This will be a problem. Phil Steele compiled the data of returning starts by offensive linemen. I love these numbers. Obviously, it doesn't mean that the team with more returning starts will beat the team with fewer starts, but it does give hard data for my plow horses. Any school with more than 90 starts returning is in the Top 20% of Division I.  Any school with fewer than 50 starts returning is in the bottom 25% of Division I.  Everyone else is in the middle, where experience is unlikely be a strength or weakness.

Not good for Penn State, wouldn't you say?

So what do I see for Penn State? I envision Evan Royster swallowed up before he gets a chance to move out of the backfield. I picture Daryll Clark constantly throwing on the run to new receivers. I see a new secondary picked apart after the front seven fails to get pressure. But, I still see Penn State picking up 7 or 8 wins because of the schedule. They'll breeze through their four non-con games (Akron, Temple, Syracuse, Eastern Illinois...seriously?). But, I see the Lions losing at least four of their conference games. I think that they'll split with Iowa and Minnesota in Happy Valley. They'll blow out Indiana, but they'll lose to the OSU. On the road, they could lose each one. They won't, but it's in the realm of possibility.  I'll take losses at the Big House and East Lansing and wins in Evanston and Madison Cham-bana (I was thinking Illinois and typing Wisconsin.  My bad). That equals 8-4, with two losses in their last three weeks (in what will still be considered a weak Big Ten). I bet that ends up outside of the Top 25. I still see this comment being true.