Share All sharing options for: Last Call Soaks Up Los Angeles, Talks How to Survive Summer

Some will say I've sold out -- seeing as it is I'm presently camped on a Silver Lake patio, sipping Orval out of a Cognac glass, the wrapper on a Sprinkles cupcake crumpled lethargically next to a matchbox from The Viper Room.  And, I'm wearing a Dodger's cap! 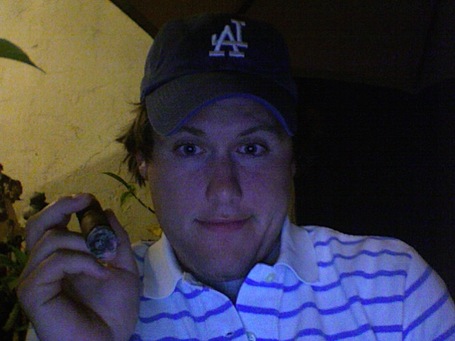 It's strange.  This is the best time of the year in weather, and the worst time of the year in sports.  With baseball flooding FSN, and fifty-eight days to go until pads start popping, it's easy to become a bit lethargic.  Alas, there's hope.  Here's a courtesy guide for how to survive the dog days of summer.

Yeah, we know -- you're frequenting the golf course and the pool.  You're inviting your wife's cousins over for backyard barbecues.  But even as you flip pounds of frozen ground patties over flaming coals, your manhood is shrinking and it's not just because you're rocking Tommy Bahama shirts with the top two buttons undone.

It's college football.  You miss it.  You miss the mornings, trucking through gravel parking lots, and over matted, wet grass to get to the stadium.  The green Porta Johns, lined up like lights at the end of the Buchanan's dock -- the hot stench of urine, half-filled plastic cups of beer on the ledge of the trough, the oversized mesh jerseys, and the concrete claps as you make your way up to C-Deck.  You miss the third down bells, the sunburns, and the extra salty popcorn.

Well friends, as a great American novelist once said, "you can't take it with you," but you can be ready.  Here are our recommendations to get geared up for 2009.

1. Learn the history of your team.  Sure, you think you know it -- like I think I know "The Rivalry," Chic Harley or Hopalong Cassidy.  There's always more to learn.  Head over to the campus bookstore and grab a copy of the latest team anthology.  Then read it, cover to cover.

2. Re-watch your 2008 favorites on DVR.  Every season each of us tapes like 60 games on the dual tuner.  Then, we proceed to massacre our archives, so some significant other can set up a series recording of Dancing With The Stars.  Still, if you're like me a few broadcasts survived, hidden between episodes of The Bachelorette.  Watch them.  Better yet, drink a few beers and watch them.  Pretend that you don't know the outcome.  (Or, if you don't have to be at the office early, drink enough that you can't remember what happened).  Yell, curse -- take an entire series and focus on just one player.  Here are the games/players I'll be revisiting:

3.  Study the depth chart.  Can you name every player that's primed to start for your squad?  More importantly, can you identify the flavor they bring to the game?  As We Will Always Have Tempe reports, Ohio State's Rob Rose is "built like a freaking dump truck [who should] get in on third downs almost exclusively."

Do you know why?  If you don't, find out.  You'll be the sultan of the stands.

4.  Try out a new tailgating recipe.  Want to delight your guests in 2009?  A bag of Ruffles from Kroger just won't cut it.  Surf a bit on Epicurious, and teach yourself a new dish, like these homemade baked potato chips.  Do a dry run, so you perfect the art.

Here's what you can expect out of The Rivalry, Esq.

More effulgence when Last Call returns to the Midwest, and the barstool...