The Vaunted Wisconsin Rushing Attack in 2009

Share All sharing options for: The Vaunted Wisconsin Rushing Attack in 2009

Bama Hawkeye had this to say in his 2009 Wisconsin Preview:

In so many ways, the Badgers have become the Big Ten's flagship institution...when the rest of the country talks about Big Ten football, they think of power. Slow, plodding power. Slow, plodding, corn-fed, dairy-fed power. And while every other team in the league has at least flirted with opening up their offensive systems, Wisconsin has not.

2008 was a disconcerting year for Badger fans, full of questionable coaching decisions and uncertainty at the quarterback position. For all the focus on the run game and the big Wisky OL, Badger fans have been spoiled by excellent quarterback play from Tyler Donovan, Jim Sorgi, Brooks Bollinger. These QB's were adept at managing the two tight end sets and keeping defenses off balance with effective play action and rollout keepers. Signalcalling was suspect for the Badgers last year - even though the run game was statistically one of the best in the Big 10, the Badgers lost games because they lacked an effective all around attack (not to mention a solid defense).

The Champs Sports Bowl against Florida State was 2008 in a nutshell. The Badgers pounded the ball down the middle for 201 yards rushing, a huge number against a FSU defense that had easily slowed three power running offenses in 2008 (Clemson, Virginia Tech, Maryland) and routinely kept 8 men in the box. But Wisconsin still suffered a 42-13 blowout loss that included 0 rushing touchdowns, only 132 passing yards from quarterback Dustin Sherer, and a 10 minute deficit in possession ball control.

The simple strategy that slowed the Badgers? Contain the run and eventually get their offense to a 3rd and long situation... 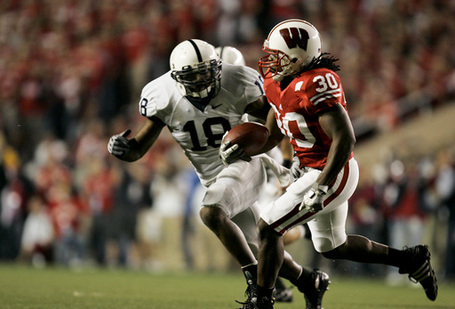 Quarterback play will be the focal point of the Badgers improvement. We at The Rivalry have been less than impressed with Sherer's mechanics and the way he ran the offense in 2008. Bielema runs some shotgun formations and has spread the Badgers in three wide receiver sets, showing different looks to at least give opposing defensive coordinators something to ponder. But until Sherer proves he can run the play action and move around the pocket confidently, Clay and the other explosive Badger back Zach Brown (above) will be seeing a lot of stacked boxes.

With the run game be a focal point? Can it be slowed?

The running game is still the bread and butter, and why shouldn't it be? To quote Adam from Bucky's 5th Quarter:

I really can't see the Badgers getting away from their running game this season. It's not like the passing game has been fixed (Dustin Sherer is still the quarterback) and sophomore RB John Clay is poised to have a huge season in the backfield.

As the rest of the conference continues a shift to the spread offense, Wisconsin's power running game is almost becoming an advantage because it is no longer the norm. Expect the Badgers to run the ball right up the throats of their opponents early and often. It's just what we do in Wisconsin.

Damn right. And they do it with authority. The offensive line averages 314 lbs and will be led by veterans Gabe Carimi, John Moffitt, Josh Oglesby, and Bill Nagy - each have significant experience and the size to maul. Phil Steele says Wisky doesn't have great experience at the line position, but injuries in 2008 allowed Oglesby and Nagy to get valuable playing time. Much has been said of Clay and Brown - Clay the highly hyped, supersized "next Great Badger Back" and Brown the smaller but tough runner. And Adam is correct, this antiquated kind of attack has become the exception, even in the rough and tumble Big 10. Ron Zook said last year:

The sweeps, the off tackle dive, the counter sweeps, the draw plays...It's all going to continue. No one team has really stopped it consistently (the Badgers lowest single game rushing total in 2008 was 116 yards against Minnesota). The 2008 Badgers actually had more rushing yards than any Wisconsin team in the last five years, which leads to the obvious conclusion that while this vaunted run game will continue to flourish, other elements will determine whether Bielema can actually win some games and remove his butt from the warm coaching seat.

Other Team Specific articles from the last couple months...

Is Northwestern going to be a contender?

The Case against Penn State

How to beat Ohio State

Can Indiana Football be saved?