Football Outside of the Big Ten - Conference USA

Share All sharing options for: Football Outside of the Big Ten - Conference USA

From time to time, it's important to look outside the Big Ten and remind ourselves that there is football being played by other teams in other conferences.  The Rivalry, Esq. continues its look at those other conferences with the classic middle child - Conference USA.

I was trying to think of why I had zero excitement to write up this conference.  It's because, since the Big East raided the league, it doesn't "fit" anywhere.  It's better than the MAC and Sun Belt.  It hasn't had the dominant teams that the Mountain West and WAC have had.  The league has had four straight ho-hum years with a conference champ having three or fours losses.  What's needed is a team to step up as Utah, Boise State, Hawaii, TCU, and BYU have done and stake a claim to be able to dominate its own league and hang with the big boys.  Can that happen this year? 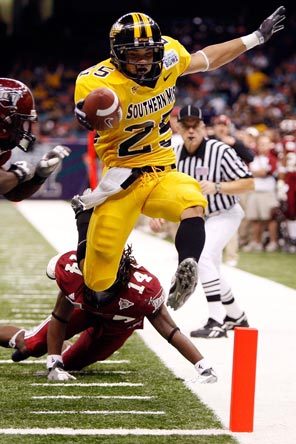 Southern Miss has announced that the gold jerseys will be back in 2009.

The East Carolina Pirates won the Eastern Division with a 6-2 record.  The 7-1 Tulsa Golden Hurricane won the Western Division, winning the head-to-head tiebreaker over the 7-1 Rice Owls.  In the C-USA Championship Game, the Pirates, collecting 7 turnovers, defeated Tulsa 27-24. 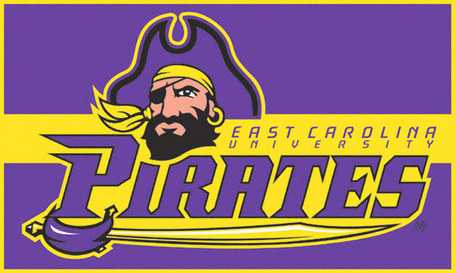 Early last season, it felt like East Carolina might be the power team that the league needed.  The Pirates out-Beamered Virginia Tech on opening day in Charlotte for a 27-22 win.  A three-touchdown win the following week over West Virginia, and the Pirates had taken down two Top 20 teams in two weeks.  An overtime loss to North Carolina State two weeks later brought down the Pirate ship, though.

A punt block AGAINST Virginia Tech?  That's not how it's supposed to work....

The league suffered through a large number of near-misses against the BCS foes.  UCF fell to Miami and South Florida, Tulsa lost to Arkansas, ECU lost to NC State, and Memphis lost to old-foe Louisville, all by a touchdown or less.

Not a lot to say about this one.  It was never in doubt.

Is the conference's glass half-full?  Six teams played in bowl games, and the majority of them won.  Southern Miss beat Troy 30-27 in an overtime New Orleans Bowl.  Houston atoned for a regular season loss, defeating the Air Force 34-28 in the Armed Forces Bowl.  Rice's 38-14 win over Western Michigan in the Texas Bowl and Tulsa's 45-13 victory over Ball State in the rain-soaked GMAC Bowl showed the gap between the MAC and C-USA. 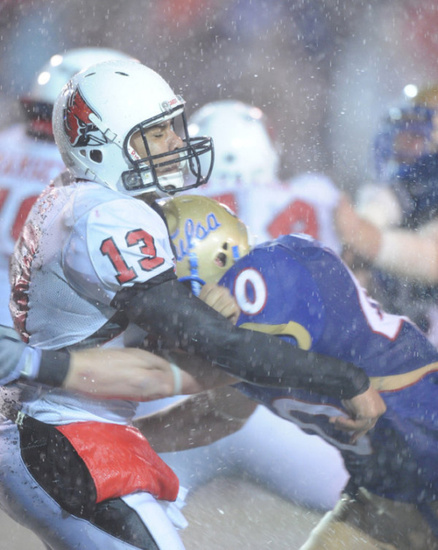 It wasn't a blood bath, but it was a birdbath.

Is the conference's glass half empty?  In the two showdowns against BCS teams, the league took the bagel.  Memphis's 41-14 loss to South Florida in the Saint Petersburg Bowl wasn't a surprise, but there was disappointment in league champion East Carolina losing the Liberty Bowl 25-19 to Kentucky, the eighth place team from the SEC.

Can someone make some noise outside of the conference?  ECU, Southern Miss, Tulsa, Memphis, and Houston all will have their shot to knock off some big names.  If one of them can string a couple of big wins together...

Let's look at five of the teams who went bowling last year.  If ECU can knock off the Mountaineers, Tar Heels and Hokies, they will be the non-BCS buzz team.  Same goes for Memphis with its games against "it" team Ole Miss and Tennessee.  Houston can do the same, although they may wish that the Texas Tech game was two weeks earlier.  If the Red Raiders get pounded by Texas seven days prior, a win by Houston will not look as impressive.  Southern Miss can get a huge boost if they beat Kansas and the Jayhawks end up winning the Big 12 North.  Tulsa has lost a lot from last year, but if they can beat OU...let's move on.

None.  I guess the Big Ten would rather pay MAC teams than pay C-USA teams.

The league champ will again fo to Memphis to face an SEC team in the Liberty Bowl.  St. Pete will see a C-USA team against a Big East foe.  The league's teams will face Sun Belt, WAC, and Mountain West opponents in the other three games.  It would be nice for the league to face a better finishing team from a BCS league, but considering the losses in the last two Liberty Bowls, it may be better where it is.  The league is no longer associated with the GMAC Bowl in Mobile, AL.

In the East, I'm expecting to see a two team showdown between East Carolina and Southern Miss.  The Golden Eagles are on the rise (if DeAndre Brown is healthy), but I like a sixth year QB and experienced offensive line.  I'll take the Pirates to repeat.  If you want a dark horse, look out for Memphis.  In the West, everything is lined up for Houston to dominate.  Tulsa and Rice lose a lot.  UTEP is likely a year away.  SMU and Tulane...no.  When it comes to the Championship Game, give me the Cougars.  No team has successfully defended its title in the league since Louisville in 2001. 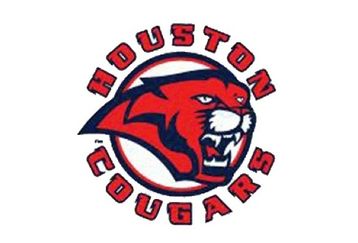 I feel very confident in predicting that there will be none.

Houston's conference title will put them in the Liberty Bowl.  There's a shot at a BCS bid if things break right, but I don't expect it.  I'd love to see East Carolina get a shot at another Big East team in St. Pete.  Let's figure Memphis for the New Orleans Bowl, Southern Miss for the Armed Services Bowl and UTEP for the Hawaii Bowl.  Tulsa and Central Florida could surprise.

Yes.  But, you'll have to wait for another week and the Mountain West preview for me to explain how.

This is a question posed to one of the site's founders that relates the conference at hand with the Big Ten.  Graham Filler is up again...

East Carolina's Skip Holtz was a hot name in coaching rumor mill after last year's impressive season.  In fact, he reportedly turned down Syracuse to remain with the Pirates.  If he has another strong season at ECU, is there any Big Ten job that he turns down (assuming he were to be offered each of these jobs) to stay at the program he is building?

Holtz is no dummy. He knows that college football coaching is a fickle roller coaster ride. He's been all over the place coaching, from I-AA to Notre Dame and now at ECU. So what should he do thanks to this ECU success? Hold out for a top notch job that can either make him a contender right away or put him on the road to be a BMOC. A job like Syracuse doesn't promise either - so he turned it down. In the Big 10, there are only a couple possible job openings for next year or 2011 --- Michigan, Indiana, Wisconsin, Illinois, Purdue (ed. note: we're not predicting these openings, only discussing possibilities). I could never see a son of Lou Holtz at UM, so we can cut that out. The others? He wouldn't take the Indiana job; it's lower down on the totem pole than Syracuse. Illinois? Not a whole lot of recent tradition for someone with big dreams like Holtz, but not totally out of the question. I could see him taking the Purdue job if Hope doesn't succeed or the Wisky job if Bielema train wrecks again.

One thing to remember - He's got no fear. He met his wife in Bobby Bowden's coaching office, he led the ND offense with Rick Mirer...His ECU teams play fast, angry, and aggressive. Another strong season and his name is going to be floated everywhere like Turner Gill's was this year.