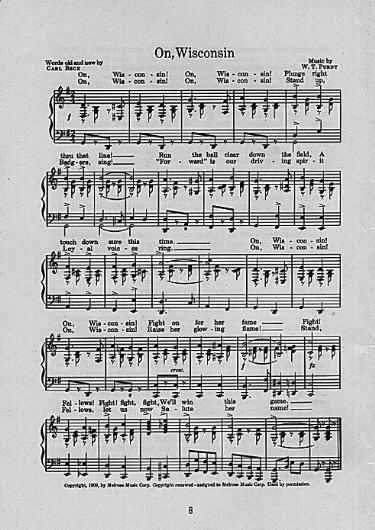 Now comes the world's most famous fight song -- a blitzkrieg of brass and snare.  It goes by the name "On Wisconsin!"  As the University of Wisconsin Marching Band home on the web describes:

On Wisconsin is not only the University "fight song," but it has also been designated as the official State Song of Wisconsin. It is undoubtedly one of the most popular school songs in the country and has been adopted by thousands of high school bands as their own. It is rare to attend a high school football game anywhere in the U.S. and not hear On Wisconsin being performed by at least one of the school bands...

John Philip Sousa has called On Wisconsin, "the finest of college marching songs." Traditions such as this make On Wisconsin a personal university to faculty, students, and alumni everywhere.

You can hear the tune here.  Careful, it's catchy.