Share All sharing options for: Why Ron Zook Can't Coach 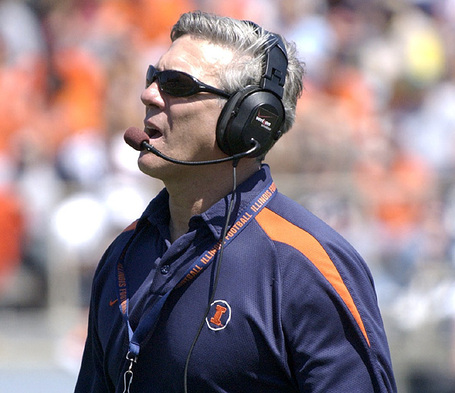 Before you assume this is a hate piece, know, my actual intent is to profile two very different men: Ron Zook the recruiter, and Ron Zook the coach.  Despite three losing seasons in four years, Illinois recently gave Zook a one year extension.

Adam Rittenberg knows why.  It's a reward for his recruiting.  In the wake of an abysmal 2-10 2006 debut, Zook roped in the 17th best class in the nation. Still doubt his pipeline?  Whose recruits do you think Urban Meyer has been firebombing the South with for the past three seasons?

Dubbed, "the Pete Carroll of the Midwest," Zook's charisma stands out to players accustomed to the stiffness, and inflexibility of other suitors.  But unlike Mr. Carroll, who fires resoundingly on two cylinders, Zook has fallen flat more often than not on the field.

He can't adapt to in-game adjustments.  Plain and simple.

It's a scenario peppered all over his resume.  Zook leads his troops into batle, commanding a respectible advantage off the blocks, only to lose his grip late in the game.

He did it again against Indiana and Wisconsin in 2006.

The fact is Zook does a honest job preparing his boys to battle.  His game plans are fundamentally sound.  It's just, the moment opposing squads make adjustments, Zook fails to evolve his strategy.

Good coaches think ahead, three, four, five steps in advance.  To deliver the Illini, Zook needs to keep up.