Football Outside of the Big Ten - the Mountain West

Share All sharing options for: Football Outside of the Big Ten - the Mountain West 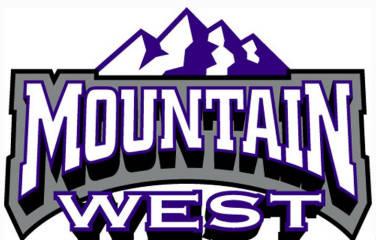 Utah's season was wonderful, just as it was in 2004.  What was most important though, was the depth of the league.  It's not just that the best Mountain West team beat the second best team from the SEC and was ranked higher than the champions of five of the six BCS Conferences.  What matters more is how good TCU looked in beating Boise State.  The final AP poll has the second best team from Mountain West ranked higher than the best team from the Big East.  And the ACC.  And the (gulp) Big Ten.  It matters that even after BYU lost to Arizona in the Las Vegas Bowl, they were respected enough to stay in the rankings.  It matters that Air Force was a legitimate team as the 4th Best Team in the league.  Now what matters most is that it continues. 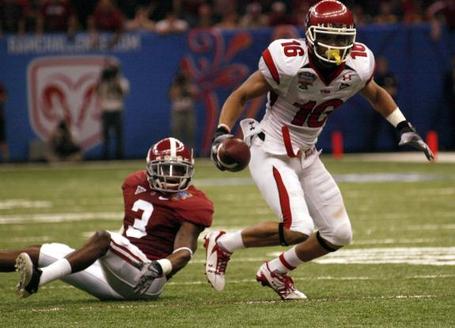 The Utah Utes were one of four teams to finish the regular season unbeaten at 12-0.  Two of the other undefeated teams lost in conference championship games.  The third lost its bowl game.  Only the Utes finished with an unblemished record.

Utah had an important home win over Oregon State, the almost-champion of the Pac 10.  Even beyond the Utes, the conference racked up quite a list of victories.  BYU beat UCLA (fresh off a victory over Tennessee) by 59.  New Mexico beat Arizona.  UNLV claimed the scalps of Arizona State and Iowa State.  Wyoming went into Neyland Stadium and beat Tennessee.  TCU dropped its game with Oklahoma 35-10, but hoping for that win may have been a bit too much last year.

The game of the season for the conference last year was TCU's Thursday night visit to Salt Lake City.  The #12 Frogs dominated the first quarter, moving out to a 10-0 lead over the #8 Utes.  Utah managed a pair of first half field goals, and won the game on Brian Johnson's last minute touchdown pass.

It was a winning year in the bowls, too.  Utah dominated Alabama in a 31-17 Sugar Bowl win that was never really in doubt during the last 25 minutes of the game.  TCU defeated previously-unbeaten Boise State in a classic played in the Poinsettia Bowl.  Colorado State scored two fourth quarter touchdowns to defeat Fresno State 40-35 in the New Mexico Bowl.  On the down side, Air Force lost a tough rematch with Houston in the Armed Forces Bowl, 34-28.  More disappointing was BYU losing 31-21 to Arizona in the Las Vegas Bowl. 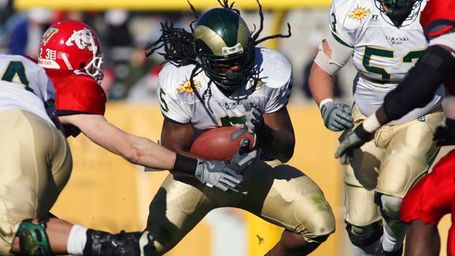 2-0 against the WAC showed the heirarchy of the conferences.

The Mountain West is doing their scheduling right.  Each of the three best teams has two BCS opponents to provide notoriety.

BYU (see Section 3d) is set up for a national title run.  If they can beat Oklahoma in the first football game played in Jerry Jones's new play pen, they'll be in the Top 10 right off the bat.  Beating a resurgent Florida State would cement it.  Utah will have a tough game in Autzen Stadium to keep its undefeated steak going.  TCU has two interesting games against ACC foes.  They should beat Virginia.  Clemson will be a true test.   I don't know how Wyoming got Texas to come North, but I doubt that it ends well for the Cowboys.

I don't know if you heard about this new place that's opening up...

The Mountain West adds a fifth bowl this year, taking the ACC's spot against the WAC on the blue turf of Boise.  The other four affiliations stay the same as last year.

I still think that the Mountain West is a three team league.  Yes, Air Force is solid and Colorado State and UNLV will be better, but when push comes to shove, it's still about TCU and the Beehive State.  TCU returns its strong offense, but has big holes to fill on its defense.  Utah returns (most of) its outstanding defense, but has really big holes to fill on its offense.  BYU returns its solid defense and its skill players, but only one starting offensive lineman.  Do you remember how I feel about that?

I think that these are three very good, yet imperfect,  teams that are pretty even.  I like that BYU hosts the other two, but I cannot get past the offensive line.  I think they're the third place team.  I guess I'll take TCU to beat Utah and win the league, but I wouldn't be surprised in the least to see Utah repeat.

I'm going to say no.  I think that Minnesota is going to be better than expected this year (more on that when we get to Big Ten predictions), and they win this one.  That said, if Minnesota hasn't learned how to stop the run since the horrible end to last season, Air Force's option could make it a sad opener for the Gophers.

The lead question has to be: does the Mountain West send a team to the BCS again.  I don't think they do this year.  I will be surprised to see any team finish with fewer than 2 losses.  I think that the Big Three will all lose at least one of their non-con games.  They'll also each drop at least one conference game.  So, let's send TCU to the Las Vegas Bowl after they win the league.  Utah faces a Pac Ten team in the Poinsettia Bowl.  BYU travels to Boise to play Boise.  The Air Force goes to New Mexico, and Colorado State heads to the multiplex for the Armed Forces Bowl.

Yes, despite what Utah fans might think right now.  Here's the best analogy I have.  Have you ever tried to win a hand of poker by waiting on an inside straight?  You were dealt a 10 and a 9.  Maybe you were on the big blind, so you limp into the flop.  There, you see a King and a Queen and a 3.  You now are a Jack from having a straight.  You stay in for the turn, but it's another King.  It's you and one surly guy across the table.  You know he has at least two pair, maybe three of a kind, by the way he's betting.  He puts you all in on that turn card.  You don't have the stack of chips that he does, and you have to make a stand somewhere.  It might as well be here.  You're all in.  He flips over a King and a 6.  He's sitting on three of a kind, and he laughs at your low odds.  He knows that at this point, he will win nine out of ten times.  The river card comes down - Jack of spades.  This is the 10% chance.  You get the money and double up your stack.

Congratulations, Utah!  You just made a BCS Bowl!  That's about the kind of talent and luck it takes to go to the BCS - drawing an inside straight.  To make the BCS Championship game will take something more though.  Imagine the same scenario, but all eight other players are in it to the end.  You're may get that Jack, but there are that many more opponents who can pull an Ace high straight, or a flush, or a full house, or four of a kind, or a Royal Flush.  You can still win the pot with a straight, but there's a lot of other hands that can be better than yours.  It's likely that a couple of them are.  You need the perfect scenario to win.

And that's what it will take for the Mountain West, WAC, or C-USA champion to make a National Championship game - the perfect hand.  Here's what I think will need to happen:

So, if Utah (or BYU or TCU) wants to play Florida for the National Championship, they need to run the table and hope that everything else breaks their way.  It may happen, and I hope that it does some year soon.

This is a question posed to one of the site's founders that relates the conference at hand with the Big Ten.  Law Buckeye is up again...

Mr. Buckeye, you represent the six BCS conferences.  That means you're being paid to make this argument.  Please explain to the court why the Mountain West champion has less right to an automatic BCS berth than the Big East and ACC champions.

(Editor's Note: Each jurisdiction's Rules of Professional Responsibility require "zealous advocacy within the limits of the law."  Although Law Buckeye may not support the position he advocates, he is professionally obligated -- having voluntarily agreed to represent the BCS -- to vigorously espouse their interests.  That's the joy of being a lawyer.)

May it Please the Court.  I'm Law Buckeye, counsel for Defendant, Bowl Championship Series.  I'm holding in my hand an Agreement between the Mountain West Conference, my client, and the ESPN broadcasting network, dated July 9, 2009.  Paragraph two states, "The champions of the Atlantic Coast, Big East, Big Ten, Big 12, Pac-10 and Southeastern Conferences automatically qualify for BCS games each year."

Counsel for the Mountain West are correct to point out -- and we do not dispute -- that the effect of the express language contained in paragraphs 2 and 3, gives the Mountain West Conference, and other "mid-majors" a decreased right, relative to other conferences to participate in a postseason BCS bowl game.

It's well settled, Your Honor that the law of contracts does not require mutuality of interest -- only that parties who enter into contracts do so free from duress, coercion, and undue influence.  The Mountain West voluntarily entered into the aforementioned agreement, knowing full-well the consequences of the operative language in paragraphs 2 and 3.

They do not dispute their intent to enter into an unambiguous agreement.  Rather, they claim that they had no choice but to do so, and that because of this "economic duress," the agreement is invalid.

This position is misguided.  Courts rarely find that economic duress rises to the level of depriving an individual of his or her free will to enter into an agreement.  In this case, the Mountain West had plenty of incentive to sign up for the BCS.   As experts have noted: "In the last five years, four mid-major college football teams, squadrons on the outside of college football's cartel, have played in BCS bowls. Utah in the 2009 Sugar and 2005 Fiesta. Hawaii in the 2008 Sugar. Boise State in the 2007 Fiesta.

In the 54 seasons before 2004, four mid-majors made BCS bowls or the high-paying, New Year's Day bowls that eventually formed the Bowl Championship Series: Air Force in the 1959 Cotton and 1971 Sugar, Wyoming in the 1968 Sugar and Louisville in the 1991 Fiesta.  In fact, Your Honor, the BCS has done more in half a decade for the the mid-majors than any single coach, player, school or system did in the half century before, with the exception of BYU coaching legend LaVell Edwards.

The Mountain West freely partnered with the BCS, and to date, they've received the benefit of their bargain.  To the extent they now wish to claim the agreement is repugnant of some larger competitive value, they should turn to the legislature for vindication of their interest, not this court.  Thank you.

I'll take it under advisement, counselor.