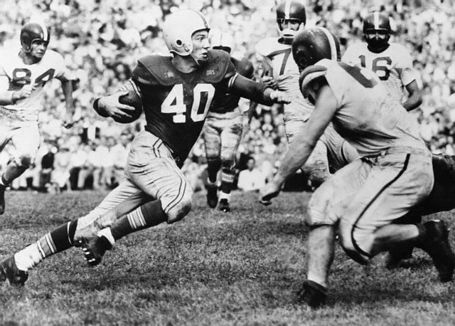 Most conferences don't have four programs that have won it all in their history, nevermind completing the feat in less than a decade.  Who were the brains behind the operation?  Coaches like "Biggie" Munn, Forest Evashevski, Murray Warmath, and, oh yeah, some guy named "Woody."

We'll get back to him later. 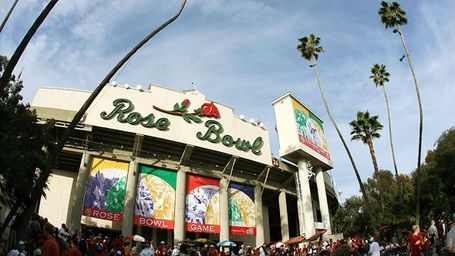 You can have your national championship sponsored by J.P Morgan Chase & Co.  The premiere postseason destination is and will always be in old Pasadena.  Nestled in the Arroyo Seco gorge, this splendid streamline moderne and terra cotta stadium has hosted college football's postseason patriarchs for over a century.  As the Tournament of Roses reports:

[T]he Rose Bowl Game kicked off a myriad of college football legacies in 1902. Since then, the game has showcased 18 Heisman Trophy Winners, produced 28 national champions, [and] featured 197 consensus All-Americans.

I drove by America's Stadium on the 210 shortly after midnight this morning.  She sits nestled in between a dark curtain of mountains -- a glorious shadow in the valley.  Her recognizible insignia: the brilliant white bulb scrip burning in the dark.

My first Rose Bowl was in 1997.  As I wrote about the experience last year:

I was twelve years old with my dad in Section 14 of the Lower Rose Bowl in Pasadena, California. Jake "the Snake" Plummer's eleven yard scramble put Arizona State 1 minute and 40 seconds away from the school's first National Championship. Cooper must have felt some admiration in watching the program he carried to a Rose Bowl victory in 1987 on the threshold of immortality. Or perhaps not. Perhaps it was like watching a startup firm you left before the dot-com boom become silicon royalty.

Cooper put down his clipboard, placed his hand on Joe Germaine's shoulder pads, and wafering the bill of his block O cap, put two fingers into the air. He then turned his back and wondered down the sideline. Fifty-nine seconds later Germaine hit David Boston in the north west corner of the end zone from five yards out for the game.