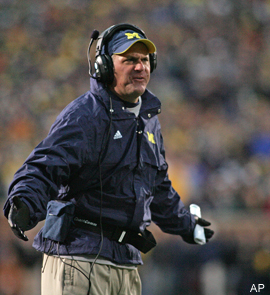 I saw a picture of Rich Rodriguez this morning and had the damnedest thought: the guy looks a lot like ex-Ohio State coach John Cooper.  The rain parka, chewing tobacco cheeks, and unfriendly scowl, are eerily reminiscient of the man I watched walk the sidelines as a young child in Columbus. 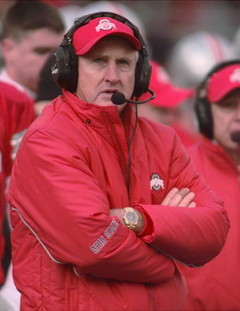 Surely, the resemblance is illusory -- my connection of the two brought on my the splash both are currently making in NCAA headlines -- but once the idea was lodged in my mind, it was difficult to shake.

I summarized my feelings about John Cooper a while back:

Cooper's cognitive opus...exposes exactly what he lacked: an understanding of team dynamics, approachability, and pride in a team's history and tradition.  Like an executive VP at a medium-sized financial services firm Cooper saw programs as opportunities to sharpen skill sets and resumes. His mission was not to be a Buckeye, but rather, the best. As a child at the Horseshoe in the mid-90s, I always felt the man in the oversized windbreaker was more interested in scanning his clipboard for the next play than the players themselves.

Yes. That's why he was good. Distanced from the emotion of the game, Cooper was able to concentrate on its mechanics. But that's also why he couldn't appeal to the soul of the sport. The Game was a game. Week 11. Nothing more, nothing less.

Both Cooper and Rodriguez were brought into their programs as outsiders.  Neither grew up in-state, neither were alumni, and neither coached (in any capacity) at any program within 100 miles of their eventual suitor.  Both were brought in for a specific talent: Cooper, for his ability to recruit on a national level, and Rodriguez for his offensive mind.

And while Cooper enjoyed success at the helm -- bringing the Buckeyes back into the national championship conversation, year in and year out -- he never endeared himself to the fans and never became the face of the program.  Cooper's lack of understanding, or indifference to, the Buckeye Nation, was ultimately his downfall.

Rodriguez is capable of winning at Michigan.  But whether or not he's given the chance will depend on the balance he strikes between his principles and his partisanship.  Rich doesn't have to be a Michigan Man, but he does have to be the right man for Michigan.