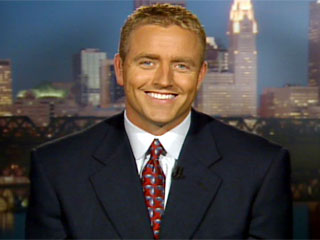 Like him or not, Kirk Herbstreit is the face of commercial college football.  Naturally, he's one of us.  Starting at quarterback for the Buckeyes in 1992, Mr. Herbstreit threw for 1,904 yards (including a 271 yard barnburner versus Michigan that saved John Cooper's job).

Kirk's positive, Midwestern drawl, unnaturally white smile, and round collar are a ubiquitous part of Saturdays in the fall.  Whether tracking through wet grass in open-toed sandals on the way to a College Gameday broadcast at 8:00 a.m., or spread out on the couch in a beer-induced slumber at midnight after Saturday Night Football, Kirk is everywhere.  In fact, my earliest memory of college football is hearing the crowd at the Horseshoe chant, "Herb-streit...Herb-streit."  I was eight years old.

When he's not on camera, Mr. Herbstreit is a regular at the Hyde Park Steakhouse in Columbus, Ohio's Short North Arts district.