You had to know the steroid injected, armor plated Spartan mascot was going to make it onto this list. 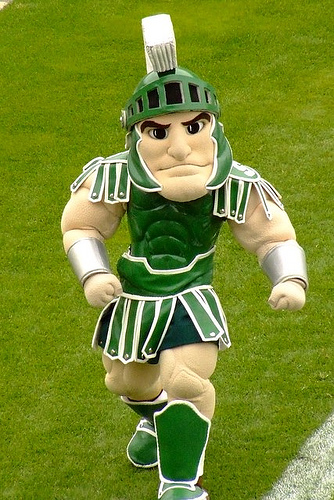 Sparty is truly one of the luminaries in the era of dynamic, flexible mascots. Primping and preening on the cover of EA Sports NCAA '09? Hell yeah. Doing commercials on ESPN? All in a days work. You can even invite Sparty to your birthday party or wedding. According to Hoopedia (?):

"Sparty was an immediate hit, in part because the foam-rubber body parts and vinyl breastplate have a freedom of movement that allow the anonymous student who portrays Sparty to be quite expressive despite the costume's fixed stare."

However, Sparty isn't just cheering and brawn. No no. Apparently, he is the GREATEST MASCOT DANCER/PERFORMER I HAVE EVER SEEN IN MY LIFE (see below). Here is the story: Sparty has won three Mascot National Titles and apparently the final step of the competition involves a two minute dance piece (think Napoleon Dynamite-ish). I am amazed at how this monstrous helmeted mascot can move. It's like Kevin Bacon in a fatsuit.

I've also heard the Sparty suit doesn't have the most pleasant odor (H/T to The Only Colors for that fact).