Share All sharing options for: 80 Reasons to Love the Big Ten - No. 44 - The Victors 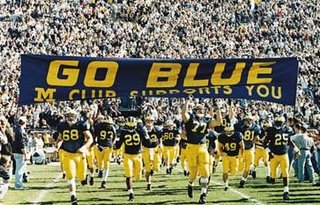 The Victors is the ever-recognizible clamoring of horns and crashing of symbols that celebrates college football's most winningest program: The University of Michigan.

It's one of the most recognizible fight songs in college sports.  It's also the backdrop to a rivalry that spans a century.

First performed in public in 1899, "The Victors" did not catch on right away, and did not become Michigan's official fight song until many years later. At the time, the song "There'll Be a Hot Time in the Old Town Tonight" was considered to be the school song.

An abbreviated version of the fight song, based on the final refrain, is played after the football team either scores or makes a big defensive play, such as an interception. Its full lyrics span several verses that run over two minutes long.

The melody of the fight song is very similar to the trio section from The Spirit of Liberty March, published seven months earlier by Tin Pan Alley composer George "Rosey" Rosenberg.  This song is often referred to as "Hail to the Victors," which is not correct.

While rarely performed at length, the lyrics are:

Now for a cheer they are here, triumphant!
Here they come with banners flying,
In stalwart step they're nighing,
With shouts of vict'ry crying,
We hurrah, hurrah, we greet you now, Hail!

Hail! to the victors valiant
Hail! to the conqu'ring heroes
Hail! Hail! to Michigan
The leaders and best!

Hail! to the victors valiant
Hail! to the conqu'ring heroes
Hail! Hail! to Michigan,
The champions of the West!

You can listen to it here.