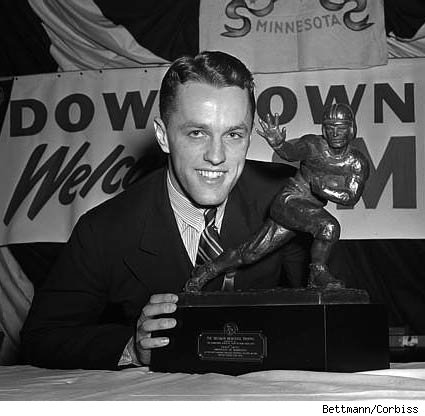 How many players can you name that inspired a feature length film?  Nicknamed "Boo," the legendary Bruce Smith played halfback for the back-to-back national champion Minnesota Gophers in 1940 and 1941.  He received the Heisman Trophy two days after the attack on Pearl Harbor.  As Wikipedia reports:

During World War II he served as a United States Navy fighter pilot. After the war he briefly played in the National Football League with the Green Bay Packers (1945–1948) and the Los Angeles Rams (1948).

The movie, "Smith of Minnesota", was released in 1942. The premiere occurred in his home town of Faribault, Minnesota, to the amazement of the locals due to this novelty. However, laughter was heard in the movie house when certain advanced technologies, for that time (direct-dial phones, streetlights, etc) were seen as part of the scenery - courtesy of being filmed in Hollywood Calif.

He was diagnosed with cancer in the spring of 1967, and he spent the next several months visiting young cancer patients with the Rev. William Cantwell. Smith lost over half his body weight before succumbing to the disease. Cantwell, who was unfamiliar with Smith's sports achievements, nominated Smith for sainthood.

In 1972, Smith was inducted into the College Football Hall of Fame. His number 54 was the first to be officially retired by the Minnesota Gophers, in 1977. 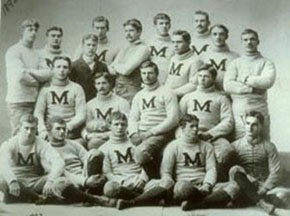 The first modern BCS team to win a National Championship, the legendary 1901 Wolverines stormed to an 11-0 season under the tutelage of Fielding Yost, outscoring opponents 550-0, and besting Stanford 49-0 in the inaugural Rose Bowl.  Yost's squad was the first to ever go an entire season undefeated, untied, and unscored upon.

College football would never be the same.