Share All sharing options for: Why Terrelle Pryor Is The Big Ten Preseason Offensive Player of the Year 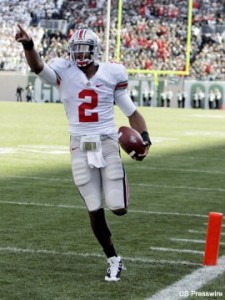 It's official.  Terrelle Pryor is the Big Ten Preseason Offensive Player of the Year.

In an announcement that surprised his coach, rallied his detractors, and motivated Penn State linebackers, Terrelle Pryor ascended to the top of the preaseason throne yesterday as Prince of Promise.  Besting upperclassmen to wrest the title and attention, Pryor's pick is a validation of what no one doubts: the kid his potential.

But should projections outweigh accomplishments?  Is energy worth more than experience?

On one hand, there's the reality that so many leaders on the offensive side of the ball have done more.  Much, much more.  Look at Daryll Clark and Juice Williams.  These are seasoned signal-callers, with six seasons, and some 9,144 passing yards to their credit.

But let's face it.  If you could pick any Big Ten quarterback to stand behind center on your team, it'd be Pryor.  It's not because he's mature -- he's not.  But he boasts as much, if not more, big game experience than his older brethren.  Playing away in the Colosseum, at Camp Randall against a ranked Wisconsin team, against Penn State in a virtual conference championship game, and against Texas in a BCS bowl give his development a trial by fire branding.

It's also not because he makes good game decisions.  He's still young.  But his instincts on the ground are razor sharp.

It's also not because he's patient.  Pryor still plays fast and loose.  But he is without question one of the most exciting players to watch in the Big Ten.

It's also not because he's arrived.  He hasn't.  But Pryor has more room to grow than any player in the league.

Finally, it's not because he's the best quarterback.  He's not even close.  But he is the best athlete.  Pryor is the fastest, best balanced and agile competetor in the conference coming into 2009.  Factor in a supporting cast that (on paper) is as strong as anyone in the league, and it's no surprise the media came to the conclusion pundits have known for some time.

Love him, or hate him, Terrelle Pryor will be a force in 2009.  Those that doubt it, haven't seen him play in person.