No. 41 - A Dentist You Actually Wanted To See 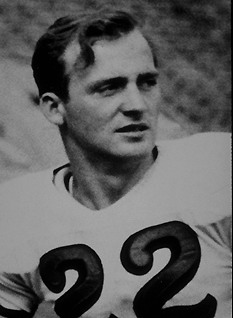 If there's ever been a football player who espouses the story of The Little Engine That Could, it's Ohio State's Les Horvath, who at 140 pounds introduced the game to something it wasn't accustomed to: speed.  This 1944 Heisman Trophy winning tailback remains the only graduate student to ever make it onto the Athletic Club stage.

Horvath was tireless. He was on the field for nearly the entirety of each contest, performed for 401 1/2 minutes of OSU's 540 minute season. He was nominated to the All-American and Big-Ten teams and garnered the Chicago Tribune, Nile Kinnick and Christy Walsh Awards. He ranked second nationally in rushing, third in total offense and eleventh in scoring,  carrying the ball 163 times for a total of 924 yards, an average of 5.7 yards per carry. In the air, he completed 14 of 32 pass attempts for six touchdown and an additional 344 yards. 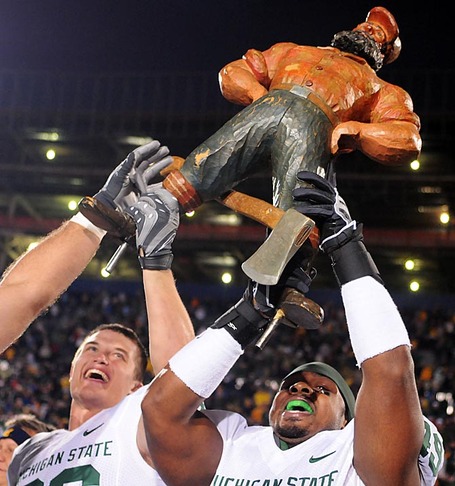 Not to be confused with Paul Bunyon's Axe, this lumber baron statue goes to the winner of the Battle of Michigan.  As Wikipedia explains:

The naming of the trophy after the mythical giant lumberjack Paul Bunyan reflects Michigan's history as a major lumber-producing state. The trophy was first presented in 1953 (State's first year as a full Big Ten member) by then-governor G. Mennen Williams, and is a four-foot-high wooden statue on a five-foot-high base.

Other facts about the hardware: