If the Spread Offense is Nothing New, Why is it so Damn Popular?

Share All sharing options for: If the Spread Offense is Nothing New, Why is it so Damn Popular?

Props to Hail to the Orange for leaving Big Ten Football Media Days with an original scoop.  After struggling to get up close and personal with Jim Tressel at the roundtable sessions, Toki wondered over to Joe Paterno's neck of the woods where he promptly noticed a small ink doodle on the tablecloth in front of the legend.  Turns out, Paterno put ink to linen to prove that he ran the spread offense in the 40s, as a quarterback at Brown. 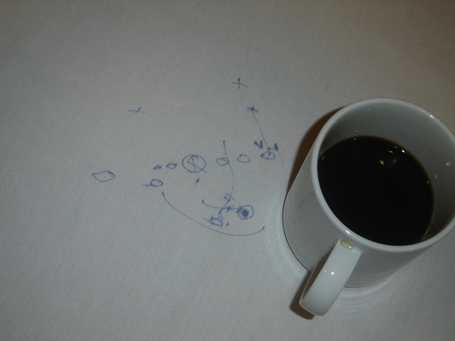 Been there, done that.

So, here's what I want to know.  If the spread is old hat, why did it take so long to go mainstream, and why is it all the rage today in college football?  And why don't we see more of it in the NFL?

48 out of 120 teams in the FBS run the spread or some derivation thereof.   What is the spread anyway?

Our friends at Corn Nation, provide a nice, concise definition.  A spread offense is "any offense which "spread (sic) out" its players across the alignment, in order to move the defense out across the field, and force them to cover more area."

Simple enough, what does it do?

As Spread Offense.com describes, "One of the best attributes of the spread offense is that its formations limit the amount of defensive fronts by forcing them to walk out linebackers to cover receivers.  This simplifies pass blocking, a bit, because there are only so many things the defense can do without leaving players unaccounted for.  It also allows other aspects of the passing game to "assist" the linemen, such as a quick passing attack and easier "hot" reads."

This description gets us to the heart of what I think makes the spread offense a la mode in CFB.  It's the great equalizer.

Think about it.  If you're a mid-major team with average size and marginal talent what happens when you try to play smashmouth against a powerhouse with guys who are bigger and faster?  You get abused at the line by a cumulative differential of force and ability.

Now, what happens if you ditch the I-Form, and deploy your arsenal into empty space?  The powerhouse is forced to follow, pouring its talent down the drain of one-on-one matchups, and diminishing room for error.  By isolating an opponent, a team can then dissect it, one read at a time -- wait for the opponent to make mistakes and capitalize off of them.

Skeptical?  Look no further than what Indiana did in 2007, or where Northwestern has come since 1999.

This equalization principle also answers our second question about why the spread offense hasn't caught on in the NFL.  When we talk about the game at the professional level we're dealing with much smaller differences in talent between teams, relative to the FBS.  With no great playing field to equalize, coaches in the NFL stick with offenses that protect their signal callers, and limit mistakes.