Share All sharing options for: 80 Reasons to Love the Big Ten - No. 39 - Bubba Smith 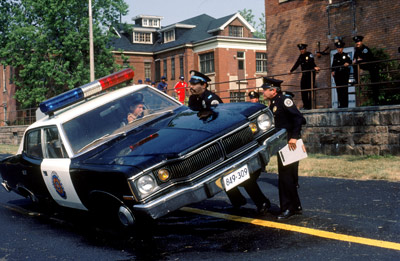 One, that's how many.  Michigan State's Bubba Smith did all of those things in his career.  From his Wikipedia entry...

Smith played college football at Michigan State University. He was awarded with All-America honors in 1965 and 1966. In his junior season the Spartans tied for a National Title with Alabama after losing the 1966 Rose Bowl 14-12 on January 1, 1966. In his senior season, he played in the "Game of the Century" (a 10–10 tie at home against the University of Notre Dame). Michigan State finished 2nd in the voting behind Notre Dame but still got a share of the National Title. In 1988, Smith was enshrined in the College Football Hall of Fame. Smith was a popular athlete at Michigan State, earning the slogan "Kill Bubba Kill."

After leaving professional football, Smith began his acting career in small movie and television roles in the late 1970s and early 1980s. He is best known for his role as Moses Hightower in the Police Academy film series, a role he has reprised in all but one of the Police Academy sequels. Smith starred in the short-lived television series Blue Thunder, partnering with Pro Football Hall of Fame defensive star Dick Butkus. He was also a part of the successful Miller Lite beer advertising campaign demonstrating "the easy opening can". He also appeared twice on Married… with Children, once as Al's old football nemesis "Spare Tire" Dixon and once as himself. Other TV appearances include the 1980s sitcoms Mr. Belvedere and Who's the Boss?.

I don't want to make too much light of Bubba Smith.  He was a dominant force for the Spartans and an All-Pro for the Colts and Raiders.  And as was discussed in HBO's excellent documentary, he was an example of a Southern African-American athlete who had to travel away from home to play major college football due to the politics of the day.  Texas's loss was Michigan State's gain.