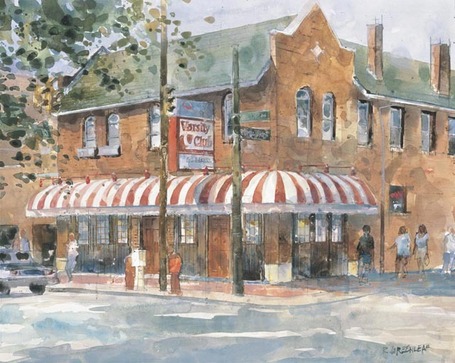 Lane Avenue deserves the credit for putting the location in the landmark Varsity Club.  Fans of all stripes flock north of the stadium to pre-game at this sticky-floored benchmark.

But this notch on our countdown's belt isn't just about getting asses to elbows with the fan faithful.  You can do that anywhere.  It's about portability.  Namely, the bar.

When Ohio State travels to bowl game destinations, the owners of the Varsity pick up and go with 'em -- renting out short-term space and hanging up their shingle.  For Buckeye fans it's a bit of home away from home.  It gives a whole new meaning to the phrase, "make yourselves comfortable." 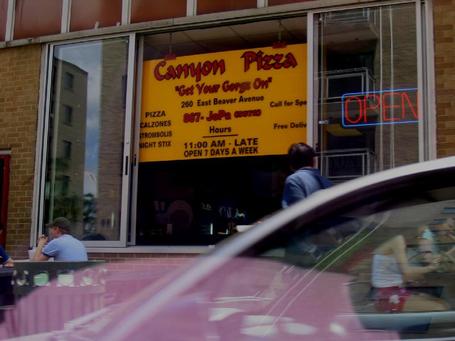 You know the feeling.  After 7 hours of straight drinking, you're starving -- but it's 1:25 a.m.  No problem, if you're in State College.  That's because a local pizzeria keeps the neons on and the table tops greasy.  Order a big fat slice with extra cheese, and carry it back to your apartment to down with a PBR and the 2:00 a.m. Sportscenter.

Have another slice in the morning while you slap on deodorant and head out for a taping of College Game Day. 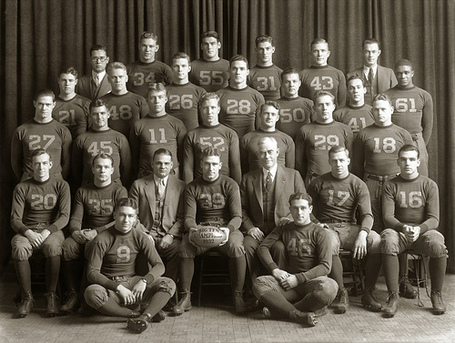 When you think of big point powers, you imagine teams like Oklahoma, Missouri, and Texas Tech.  What about L'Original?  Michigan, and the legendary Fielding H. Yost.  As one author describes:

Beginning in 1879, Michigan football achieved its first big-time success under legendary coach Fielding H. Yost, who coached from 1901 to 1920. In his first year at the helm, Yost led the Wolverines to the Rose Bowl title with a 49-0 trouncing of Stanford. With his famed "Hurry up Yost" offense the Wolverines outscored their opponents 550-0 that year.

That was just the beginning of one of college football's most impressive streaks ever. That Rose Bowl team in 1901 started a landslide of victories that would continue over the next five years. Those Wolverine teams would score 2,281 points to their opponents' 42 and become known as Michigan's "Point-A-Minute" football dynasty. 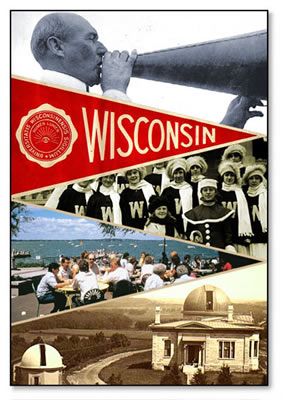 And it's not Columbus, Ann Arbor, or State College.  Try Madison, Wisconsin, which owns the honorary distinction of being Sports Illustrated on Campus' Best College Sports Town.  As the editor's write:

Madison is eating thick, red bratwursts and watching games on the twin 10-foot TVs at State Street Brats. It's doing the slow-motion wave, jumping around to House of Pain and taunting the underclassmen in Section O at Camp Randall, the giant horseshoe of a football stadium that holds 76,634 fans and rarely a soul less. It's sitting in a sunburst chair outside the Memorial Union, gazing across the expanse of Lake Mendota, listening to live music, drinking your favorite beverage and seeing the beautiful girl in front of you proudly sporting a red-and-white Bucky Badger tattoo on her shoulder. It's trading elbows with an offensive lineman in pickup hoops games at the SERF, the enormous campus gym honeycombed with so many basketball courts you can get disoriented trying to leave, leading to the happy realization that you might as well play another game.

It's walking over to the venerable Kollege Klub on a Saturday night to see the football players arrive in a flourish -- as Heisman winner Ron Dayne often did -- and then disappear into a bar as unpretentious as any you'll find on this good green earth, a place where a 16-ounce cup of Miller High Life is always $1 and the carousing is so enthusiastic that Playboy once deemed it one of the top places to meet Mr. or Miss Tonight. It is a national-title-winning Ultimate Frisbee program that takes over three fields on the far west side of campus. It is Badgers hockey fans who research the name of the mother of an opposing team's winger so as to better inform their heckling. It is no one caring if you have dreadlocks or wear Birkenstocks or sport six piercings or own the entire Star Trek DVD catalogue, for tolerance is the order of the town, and be you a nerd or a jock or a stoner or a neo-punk, you can all come together on game day.

It's over half the crowd staying after football games to engage in the Fifth Quarter, a choreographed, mass sing-and-dance-along in which students flail about as the band plays everything from polkas to fight songs. It's drinking Spotted Cow and having a beer gut as a matter of pride, whether you're a man or a woman. It is the crimson-and-white tie-dyed masses of the Grateful Red at the Kohl Center summoning un-Dead-like displays of roof-raising fervor during basketball games. It's bundling yourself in duffel-bag clothes and playing ice hockey on the lake in the winter and rowing on it in the summer.

But most of all, Madison is a town where everyone you meet is your friend as long as you know those nine magic words: How ya think the Badgers will do this year?