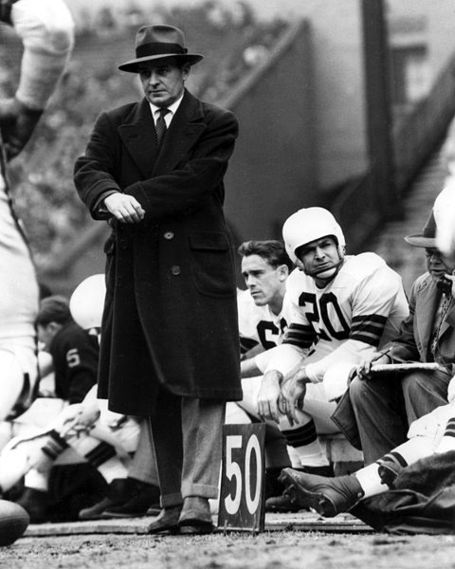 Here in the Big Ten we don't just put players in the NFL, we put entire teams in.  The great Paul Brown led Ohio State to the 1942 national title before playing an instrumental role in the founding of the National Football League, and two rival members, the Cleveland Browns and the Cincinnati Bengals.

A seminal figure in football history, Brown is considered the "father of the modern offense," with many claiming that he ranks as one of the greatest of football coaches in history. Such claims are backed by significant evidence: Brown dominated as a gridiron general on every major level—high school, college, and professional. 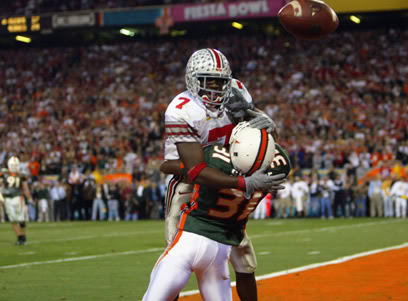 In 2002, the Ohio State Buckeyes faced the heavily favored Miami Hurricanes for the BCS National Championship.  The 11.5 point underdogs squared off against a defending national champion Hurricane squad with a Heisman finalist quarterback, a Heisman finalist running back and a 34 game winning streak.

The Hurricanes jumped out to an early 7–0 lead, quieting the largely scarlet and gray crowd. The second quarter, however, belonged to Ohio State, with a Mike Doss interception setting up a Craig Krenzel touchdown run which was followed by a Ken Dorsey fumble setting up the Buckeyes on the Miami 14. A Maurice Clarett touchdown run put Ohio State ahead 14–7 at halftime.

The Hurricanes stalled on their opening drive of the half, handing the ball over to Ohio State who drove inside the Miami ten yard line before Krenzel was intercepted by Sean Taylor, who was then stripped of the ball by Maurice Clarett on the return. The Buckeyes settled for a field goal and a ten point lead.

A Willis McGahee touchdown run brought the Hurricanes within 3 points by the beginning of the fourth quarter. On third down a catch by Chris Gamble was ruled incomplete due to his being out of bounds. Replays however seem to show that: 1) Gamble had his jersey grabbed on this play which could have resulted in pass interference call and a consequent Ohio first down. 2) Gamble appeared to land inbounds, again a first down. With a first down Ohio State would have been in a position to run the clock out and win the game without it going to overtime. Instead they had to punt and Groom punted the ball 44 yards. Todd Sievers kicked a field goal to send the game into overtime.

On their first possession in overtime, the Hurricanes scored a touchdown on a 7 yard pass to Kellen Winslow. Ohio State had no choice but to play for another overtime, with Krenzel completing a fourth and 14 pass to Michael Jenkins, giving Ohio State new life. On fourth and 3, after an initial signal of defensive holding, a pass interference penalty was called by official Terry Porter on Miami defensive back Glenn Sharpe who held receiver Chris Gamble in the end zone. However the penalty was flagged after the play was completed and while Miami was celebrating an apparent victory, causing the call to become controversial. (Note: This play has been reviewed many times with sportcasters and fans offering different viewpoints, and potentially one of many reasons for College Football adding instant replay (although this would later not become a reviewable play) With a first-and-goal at the two, Krenzel scored three plays later on a one-yard touchdown run, sending the game into another overtime. Though initially shrouded in controversy, "The Call" has since been defended by sportswriters as a good one, was validated by the National Association of Sports Officials, and was selected by Referee Magazine as one of the "Best 18 Calls of All Time."

Ohio State took the field again on offense, moving down the field quickly and capping the drive with a 5-yard touchdown run by Maurice Clarett. Miami began its second overtime possession with no options except to score a touchdown. Backup quarterback Derek Crudup, who came in for a play after Dorsey was shaken up, converted a fourth down pass to Winslow, which was followed by facemask and pass interference penalties against Ohio State that now gave Miami an identical first-and-goal situation at the two-yard line. The Hurricanes were stuffed on the first three plays, and pressure forced a desperation throw by Dorsey that fell incomplete in the endzone, ending the game with Ohio State as the 2002 football national champions.

With the win, Ohio State became the first and only team in the FBS to finish a season 14-0.  (Just 221 teams have gone undefeated in the history of the sport).

The 2002 National Championship is the Big Ten's most recent.