Amidst the high noon sky and sweltering humidity, Penn State football fans beat the heat with a local treat: Berkey Creamery Ice Cream.  Each year some 4.5 million pounds of milk pass through the Creamery's stainless steel holding tanks. About half comes from a 225-cow herd at the University's Dairy Production Research Center.   As one source reports:

Getting ice cream at the Creamery during the weekend football games has been a PSU tradition since 1896.  And this isn’t the standard Cold Stone or Ben & Jerry’s, this ice cream is so fresh that on average, only four days pass from milking the cow to getting your delicious cone.  This is one cold treat you must get your hands on.

Forbes named the Creamery one of the nations' best in 2009. 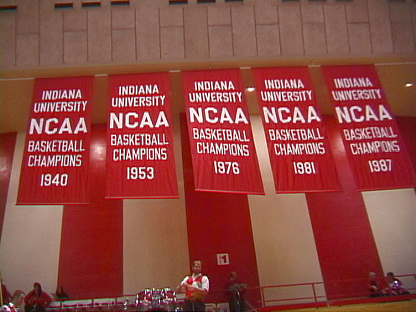 The Big Ten isn't just a football club.  The league has also been more than productive in basketball, with five programs winning at least one NCAA national title.  They are: