Football Outside of the Big Ten - The ACC

Share All sharing options for: Football Outside of the Big Ten - The ACC

From time to time, it's important to look outside the Big Ten and remind ourselves that there is football being played by other teams in other conferences.  The Rivalry, Esq. continues its look at those other conferences with the wannabe - The ACC.

Don't get me wrong.  The ACC is a solid conference.  But it is not where it wants to be.  It's not where it was expected to be.  What it has been is a solid conference with one strong program (Virginia Tech Hokies), one old captain trying to right an adrift ship (Florida St. Seminoles), one young captain trying to right an even more adrift ship (Miami Hurricanes), a couple of feel good private school successes (Boston College Eagles and Wake Forest Demon Deacons),  the classic underachiever (Clemson Tigers), Duke (Duke Blue Devils) and everybody else.  Like I said, it's not bad.  Since the 2004 additions, it's been deeper than the Big East, but not as star-studded at the top.  Depending on the year, it's been either the 4th or 5th best of the BCS Leagues.  There's nothing wrong with that.  It's just that there were much bigger dreams five years ago.  So the question is, can this be the year that the league makes a leap?  Here's a crazy thought...it just might be. 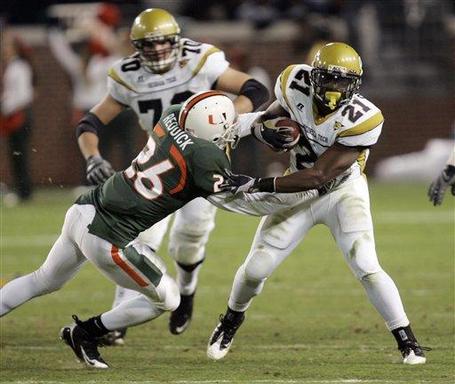 The Virginia Tech Hokies  won the Coastal Division with an 8-4 (5-3) season and a tiebreaker win over the Georgia Tech Yellow Jackets.  The Boston College Eagles won the Atlantic Division with a 9-3 (5-3) record and a tiebreaker win over the Florida State Seminoles.  The Hokies won their second consecutive ACC Championship Game over Boston College, this time by a count of 30-12.

The ACC season started with a thud on opening day.  First, East Carolina out-Beamered Virginia Tech.  Then at night, league-favorite Clemson got hammered by Alabama.  The following weekend, Miami lost by 23 to Florida.  The perception of the league was dented for the year.  Yes, there were some nice wins (like Wake beating Ole Miss, BC and UNC beating Notre Dame, Maryland beating California, and Duke topping Vanderbilt), but the league had already lost all hopes for a MNC contender. 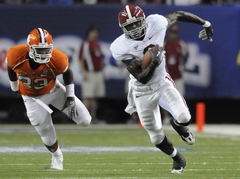 In the year-end SEC-ACC Rivalry weekend, the league did win 2 of 3 (Clemson and Georgia Tech up, Florida State down) for the first time since 2003.  It was the highlight of a middling year.  Again, nothing too bad, nothing too good.

Virginia Tech provided the ACC with its first BCS win in 73 years after 8 consecutive losses with its riveting 20-7 victory over Big East champ Cincinnati.  Florida State looked awesome in its 42-13 pummeling of Wisconsin in the Champs Bowl.  Wake avenged an in-season loss to Navy with a 29-19 victory over Navy in DC.  Maryland had a big second half in beating Nevada out in Boise.  Those would be the four  wins. 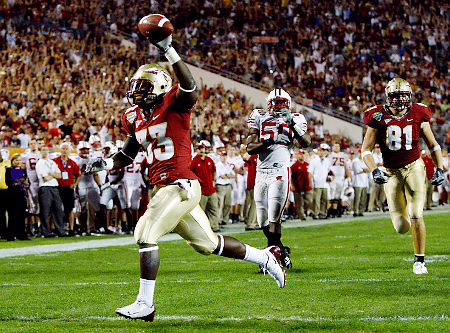 Unfortunately, the ACC played ten games, which means six losses.  Miami traveled out to the Frisco Bay and lost to Cal by a touchdown.  North Carolina played in Charlotte against West Virginia and lost one of the best bowl games of the season 31-30.  Georgia Tech 3, LSU 38.  In Atlanta.  Not good.  NC State played a good game, but fell 29-23 to Rutgers in Birmingham.  BC lost in Nashville to Vanderbilt.  Finally, Clemson dropped the Gator Bowl 26-21 to Nebraska.  Other than the Yellow Jackets, the league actually acquitted itself pretty well.

Virginia Tech has the kind of schedule that is custom built for a National Championship run.  Two games against powerful BCS teams, but not the best that each conference has to offer.  Playing a strong ECU squad, should Tech win this year, should also be a benefit. [Of course, this may be moot with recent injury news]  Florida State could end BYU's BCS dreams in Week 3.  A loss to Oklahoma by the Cougars could be forgiven.  Losing to the two BCS teams that they play will not be.  Miami hosts Oklahoma.  It's not going to be Switzer/Johnson.  It's probably not going to be a Miami victory either.

The ACC/Big East double header on the 26th is nice, but in the end, it will come down to those three rivalry games.  Taking two out of three again would be a huge statement.  Clemson should win theirs.  The question is, can Florida State or Georgia Tech step up and win?

Two changes to last year's lineup.  The #8 team of the ACC is set to face the Army this year in the Eagle Bank Bowl in DC (that assumes that Army gets bowl eligible this year...don't count on it).  Also, the league will no longer punish a team and send them to Boise.  The conference ended its contract with the Humanitarian Bowl and signed a new one with the GMAC Bowl in Mobile, AL.  The winter weather in Mobile isn't always beautiful...

Let me make this very clear.  I am fully on the Virginia Tech train.  I think they're going to beat Alabama in Atlanta.  I think they're going to finish 12-1 and be in the MNC hunt all year.  [Yes, I think the loss of Darren Evans is that big of a deal.  Virginia Tech will go bowling, but they won't win the league.]  Moreover, I am fully on the ACC train.  I think Florida State will continue to be strong and be the second best team.  I see North Carolina, Georgia Tech, NC State, and Clemson giving the ACC its best 6th place team since the Big East raid.  That's why at the end of the season, there will be discussion as to whether the ACC or Big 12 is the second best league in college football.  [Maybe.  Now I'm not so sure.  I don't know that any ACC team will now be in the MNC hunt, and that will limit the perception of the league.]

Virginia Tech will head to a third straight Orange Bowl the Gator Bowl.  The league doesn't put a second team in the BCS, so Florida State gets an SEC date in the Chik-Fil-A Bowl to take Bobby Bowden to one more Orange Bowl.  North Carolina goes Gator Chick-Fil-A, Clemson heads to the Champs Bowl, NC State plays in Charlotte's Car Care Bowl, Georgia Tech heads up to the Music City Bowl, Wake Forest travels out to San Francisco, Maryland plays in the DC game (against a Conference USA team that replaces Army), and Miami goes to Mobile. 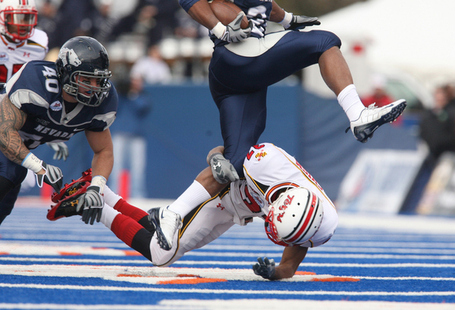 Maryland should be the last ACC team to kiss blue turf for a while.

Absolutely, but they're probably going to need to run the table.  The two spots in the big game have place cards that read "Florida" and "Big XII South Champ."  Now, should one of those teams lose a game, a 13-0 Virginia Tech [doubtful as that may seem right now] is well situated (with wins over Alabama and Nebraska) to take the bid.  Same goes for any undefeated ACC team.

The one ACC team that can get into the title game with one loss?  Florida State.  If they finish 12-1 having beaten the Gators on November 29th and winning the ACC Championship Game, they'll go to Pasadena, not Miami.

This is a question posed to one of the site's founders that relates the conference at hand with the Big Ten.  Graham Filler is up again...

You have a stacked team.  You have a challenging, but manageable schedule.  Who, in 2009, do you want to attempt to bring your school a national championship: Joe Paterno or Bobby Bowden?

JoePa, amidst some weak recruiting classes and calls for his job, kept his head and allowed his assistants free reign in changing the offensive philosophy. He also did nothing to soil his legend. As I wrote last year:

Blame for the undisciplined and felonious behavior of Penn State's players shouldn't lie in Paterno's lap either. No Nittany Lion player has ever thought, "Hey, my coach is so old that he has forgot to instill discipline, F*** it, lets go break down a door and assault someone." Paterno's age just isn't relevant, only his results are.

And now he has more results (11-2 in 2008) and the continued respect of the college football community. You think an 18 year old won't go play for JoePa because of his age? His Top 10 recruiting class begs to differ.

I want no distractions, I want a focused team, I want a powerful but not polarizing locker room presence. I want Paterno.