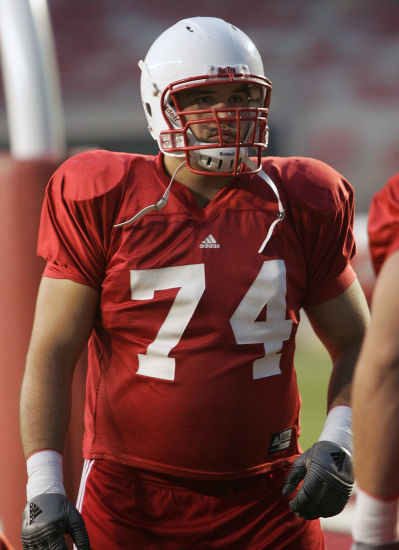 Yesterday I wrote that Bret Bielema blamed injuries for Wisconsin's surprising misfortunes last season.  I also wrote that for the Badgers to find success in 2009 all three tight ends (Garrett Graham, Lance Kendricks, and Mickey Turner) must stay healthy.

Surprise, surprise.  UWBadgers.com reports that Junior offensive linemen John Moffitt and Bill Nagy are both being held out of practice due to injury and that Garrett Graham and freshman wide receiver Jeff Duckworth are both sporting green limited contact jerseys.

Despite Bielema's insistence that all four will be healthy for the opener, another plague of infirmity for the Badgers begs the question: are these guys getting conditioned correctly?

You don't have to dig too deep to see that something's going on in Madison.  In January, Bielema tapped Ben Herbert, a former undersized Wisconsin nose guard, to take over the strength and conditioning regiment from 19 year veteran John Dettmann.  Dettmann, a lifer of the Alverez era, was polite, but noticeably restrained about his move from the front lines to an administrative position.  BadgerBeat reports that when Dettmann told the news to the team he admitted that it would have been "harder to deliver" if he didn't have such faith in Herbert.

Faith aside, that doesn't sound like a man that's ready to leave.  It sounds like an old timer getting pushed out in exchange for someone with a little more modern panache.

Will the move do the trick?  It's simply too early to tell.

One thing that is clear: if Wisky can't shake the injury bug, it's going to be another dreadfully long winter in Madison.