How to Game the BCS

Share All sharing options for: How to Game the BCS

For quite some time I've admonished the Bowl Championship Series for its subjective bias.  But it dawned on me the other day if a system is flawed it can be beaten.  So can the BCS be out-gamed?  Here's the scenario: you're a coach of an elite FBS program, returning most its starters, a star quarterback, and a formidable defense.  You're a consensus pick to compete for the national championship, but so are four other teams.  You want to make sure that when the smoke clears, you secure one of the two available spots to the big dance.

Oh, that's right.  We root for Big Ten teams here.  Here's a more relatable scenario: You're a coach of a storied Big Ten program, returning most its starters (or returning next to no starters, if you're Ohio State), a moderately successful quarterback, and a punishing linebacker corps.  You're hoping to make it into the BCS.

Can you game the system to make it work in your favor?

Step 1: Vote with Your Heart, Not Your Head 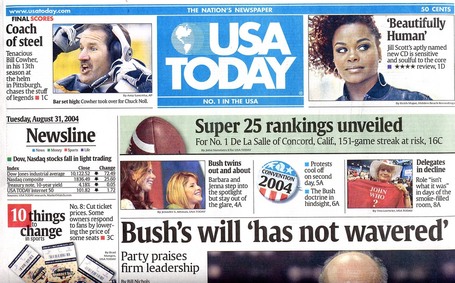 Remember the preseason Coaches Poll -- the envelope that came from USA Today that you promptly handed off to your director of operations?  Go get it back!  Take the time to fill out the ballot yourself, adhering to the following rules:

1.  Take the 12 teams on your schedule -- arrange them in order of most to least difficult.  Give them the benefit of the doubt.  For example, if you're Penn State's Joe Paterno your preseason ballot should look as follows:

Step 2: Run up the Score 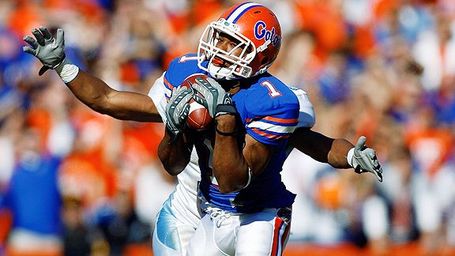 Your improved schedule will be worth its weight in gold when it comes time for the computers to crunch complex algorithms and spit out a decimal that will allow you to squeeze by teams with identical records.  Suckers.  But, there's still the human component.  You play in the Big Ten.  What can you do about negative voter perception?

Run up the score whenever you can.  How do you think teams like USC, Oklahoma, and Florida garner early respect?  They take no mercy on the cupcakes.  49-7, 60-0, 72-3.  These are the final scores you should be shooting for.  None of this 23-10 and let the second-team play the entire second half crap.  You're auditioning for 60 minutes and you better remember it.

Here's a sample of how Mark May should refer to your team on Sportscenter:

"Wow.  Did you see (Team Name)'s performance against Wofford this afternoon?  (Quarterback) passed for 521 yards of offense!  That's an NCAA record. [Insert highlight reel of 40 plus yard touchdown throws]  With this kind of offensive firepower the (Team Mascot) look unstoppable.  I'm telling you, they're the real deal."

Once you get the media wet, they'll carry you the rest of the way.  Get held scoreless in the first half by Minnesota?  You're obviously suffering from a let-down, after the previous week's big win.  Barely squeeze by Purdue?  No problem, the Boilermakers are arriving ahead of schedule. 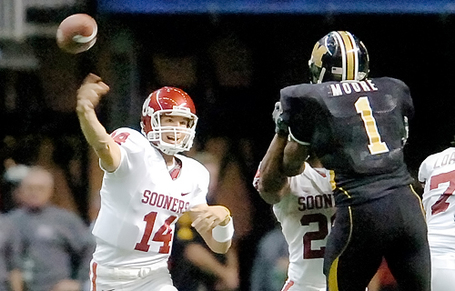 Faux Defense: Like the cardboard televisions in furniture store showrooms...

Sure, defense wins championships.  But offense wins games, and points with the voters, who are seduced by touchdown cannon fire.  In order to get your team to the top, you're going to need to play in a league where fire-breathing dragons battle week in and week out.

But you're in tortoise territory.  How do you get from dull to daring?

Two words: tacit collusion.  Call a top secret meeting with all eleven coaches and privately agree to play absolutely no defense.  Sure, you're going to have to put guys on the field, and yeah, they're going to have to make an occasional stop, but all and all the only thing between your high-octane offense and the goaline should be a pillowfight.  (If you need a reference for how your featherweights should look watch Missouri's secondary sqirm around like Prince in a leotard in 2008).

A bunch of Pink Ladies, right?

So, how'd Oklahoma do against a real defense?  You know, like a Top 10 defense?  Well, they put up a whopping 14 points against Florida (National Rank: 9).

Did anyone notice?  Apparently not: Oklahoma is in the preseason Top 3.  And the BCS National Championship Game is already painting the endzones in Pasadena to read "Florida" and "The Winner of the Big 12 South."

Sure, my system might be a little unsportsmanlike, and it doesn't always promote fair competition.  But neither does the BCS.  So bend your "values" a bit, and get in the game.  Because If you don't the Big 12 will...