Every April, Indiana University students partake in their most famous intramural event, The Little 500.  The Little 500 is the largest collegiate bike race in the United States. Riders compete in four-person teams in separate races for men and women around a quarter-mile track.

More than 25,000 people attend the races every year, with the proceeds used for working student scholarships at Indiana. The 2008 races allowed the Student Foundation to give away more than $35,000 in scholarships.

I know what you're saying..."my school has an intramural event, too."  Sure it does.  But was yours featured in the Academy Award-winning film Breaking Away?  Has it drawn celebrity spectators such as President Barack Obama, John Mellencamp, and Lance Armstrong?  I didn't think so. 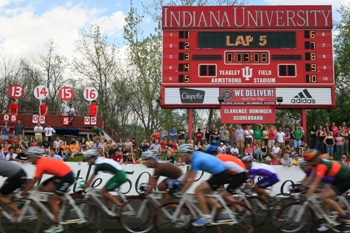 Lance Armstrong called The Little 500, "the coolest event I ever attended."

And he's been to France for some bike races, too...