The 1950s weren't just good for Apple Pie and Lucille Ball.  It was the decade that saw Michigan State become a machine.  They joined the Big Ten too.  As Wikipedia reports:

During the 1950s when Detroit was known as the world's leading automobile manufacturer, Michigan State was often referred to as the nation's "football factory." It was then that the Spartans churned out such impressive models as Lynn Chandnois, Dorne Dibble, Don McAulliffe, Tom Yewcic, Sonny Grandelius, Bob Carey, Don Coleman, Earl Morrall and Dean Look. In 1951, the Spartans finished undefeated and untied to claim a share of the national championship with Tennessee.

The team was admitted into the Big Ten as a regular member in 1953. They promptly went on to capture the league championship (losing only one game during the season) and beating UCLA in their first Rose Bowl game. After the 1953 season Biggie Munn, the Spartan coach, turned the team over to his protégé Duffy Daugherty. The team won the Rose Bowl in 1954, 1956, and 1988.

Not too long ago I wouldn't have bragged about having the first nationally distributed network dedicated to covering a single conference.  After all, I couldn't get access for the first year and a half of its reign.  Exposure to the network this summer, though, has me signing a different tune.

The Big Ten is the only conference with year round television coverage.  Twenty-four hours a day.  Seven days a week.  it delivers gems in the way of the Big Ten's Greatest Games Series.  Want to watch Jake "The Snake" Plummer and the Arizona State Sun Devils get pitchforked in the 1997 Rose Bowl? The network is where it's at.

Best of all, as Wikipedia reports, it keeps us rolling:

The Big Ten Network is majority-owned (51%) by the Big Ten Conference, with Fox Cable Networks holding a minority interest (49%). 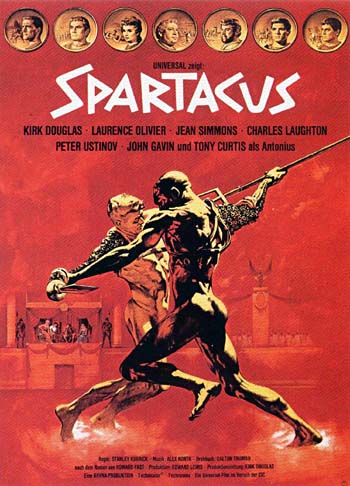 Readers of the site have no reason to know of my obsession with the Great Stanley Kubrick.  When I'm not watching football, I'm usually slouched on the couch taking in one of Stanley's 13 features.  When being interviewed by Playboy in the late 1960s, Kubrick famously noted that "The most terrifying fact about the universe is not that it is hostile but that it is indifferent; but if we can come to terms with this indifference and accept the challenges of life within the boundaries of death – however mutable man may be able to make them – our existence as a species can have genuine meaning and fulfillment. However vast the darkness, we must supply our own light."

Illumination we must supply, but not sound.  After all, when directing Sparticus, Kubrick used a recording of the crowd noise during the 1959 Michigan State-Notre Dame game as an analog for the Thracian slave's gladiatorial combat.

Consider this proof that the Big Ten brings history to life, one cheer at a time.