Will This Be Our Year?

Share All sharing options for: Will This Be Our Year?

Here we are.  On the cusp of a new season -- a new day of trumpets and thunder.  Of sweet golden fall mornings.  The smell of warm grass, watered-down ale, and false triumphs.  Yet, you're afraid, and so am I.  See, we've bought into this whole "the conference is weak" argument.  Try as I might, I cannot say that the Big Ten will be a major factor in the 2009 season. 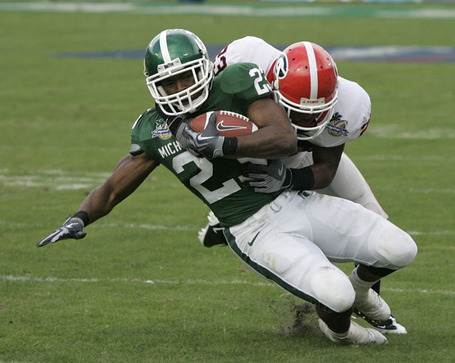 It wasn't supposed to be this way.

Glory in our sport is painfully short-lived.  If you're standing at the end of the season you're a champion.  If you're kneeling, you're a pretender.  College football isn't about real strength, it carries a "what have you done for me lately" mentality.  Take a look back at 2008.  The Pac-10 struggled through a woefully abysmal regular season.  It was the victim of the Mountain West.  One by one, the Power conference dropped out of conference games against non-BCS competition.  The pundits howled.  And yet, when the dust settled -- a perfect sweep in bowl games saved the Pacific's reputation.

Kind of the opposite of the Big 12, who could do no wrong during the regular season (save, maybe for falling victim to a dangerously poor tiebreaking standard).  When the dust settled, the great firebombers from the South managed only a single win -- Texas' last minute squeaker against our own Ohio State.

Now the Big 12 faces an ultimatum.  Win a championship, or become the new Big Ten.  A league with metals and brass, but no balls when it's all on the line.

It's because of this short-term standard that I'd like to share my thoughts on where we're at today.

We're not ready to win a championship.  Sorry.

Penn State is smart, and faces a simple schedule -- but it's without an offense line -- the kind of line that won the school its first championship in 1983.  Also gone are its receivers -- the talents who made Daryll Clark look good.  Throw in a secondary that won't be able to keep pace with fun and gun offenses, and its clear why even if the Lions make the BCS National Championship Game, they'll go down.

Ohio State may well overachieve.  But they're still young -- without a proven line, proven receivers, and linebackers solid enough to cope with a USC squad that's in a league of its own.  The fan in me won't count the Buckeyes out.  But for now, they face a very likely loss to USC on September 12th.  After that, their true goal will be to see Pasadena on New Years Day for the first time since 1997.

Iowa and Michigan State are in the same boat.  None of these teams will make it through their scheudle undefeated, and as far as I'm concerned that's just fine.

See, I think the real reason for our discontent has little to do with talent, preparedness, and execution, and much more to do with unrealistic postseason matchups.  Every year the Big Ten puts two teams into the BCS, five more teams are forced to play up against better competition.  The result?  A 1-6 record.

What gives 2009 its true breakthrough potential is that we just might get what we deserve.  One team will go to the BCS, and six others will play supporting cast.  Instead of looking up, we'll play down -- capitalizing on a favorable slate of matchups.

Will we win all our bowl games in 2009?  Probably not.  The top of the conference is still just a few steps down from competing with the likes of elite BCS competition.  But we're not as far out as some people might imagine, and I'm dying to see what the skeptics have to say when the shoe is on the other foot.  When a second-place Penn State faces off against the third best team in the SEC.  When a third place Iowa lines up against the SEC's fourth best.  When a fourth place Michigan State gets the fifth finisher in the Big 12.

What will pundits say when the Big Ten mops up the postseason?  Here's a guess: they'll declare the conference's great revival.  Bringing up the great Woody Hayes, and Bo Schembechler, the media will gush with our great unsung potential.

And they'll talk about 2010.  A year when Ohio State grows up, and Michigan returns to its devilish self.

Yes friends, we're down, but not out.  And far from done.