Here's What I Really Think Of Your Team

Share All sharing options for: Here's What I Really Think Of Your Team

With exactly one week to go until the winged seraphs in pigskin heaven return to the cheap seats, I've noticed that the conduct between opposing fans has become a little more contentious.  This isn't a surprise -- after all, we've only been "playing nice" with one another out of boredom.  But after an entire offseason of conciliatory chatter, and pooling resources it's time we get back to our corners.  In seven days we'll no longer be friends, why stall any longer?

Without further adieu, here's what I really think of your team:

Illinois: Apparently nobody on your Board of Regents studied economics, or cost-benefit analysis.  You did, after all, make Ron Zook the highest paid Public employee in your state university system.  The hefty paycheck underscores a simple reality: Illinois has never been consistent in football, and they sure as heck won't start under the watch of this befuddled glad-hander.  Ask Arrelious Benn what Fighting Illini means.  He'll say "stepping stone."

Also, Orange and Blue could be the crappiest color combination on the planet.  Your uniforms remind me of bad early 90's beach towels.  Stop by the student section on Saturdays in the fall to see a sea of Northwestern rejects.

Indiana:  I'm not even going to waste my time with this.

Iowa: Actually, I really don't have much beef with you all.  It's probably because the last time we met, you attempted to put a linebacker on Anthony Gonzalez in the slot.  One-handed hilarity ensued.  So did a 40:30 to 19:30 advantage in time of possession, and 21-point differential.  Was that the last time you guys were ranked? 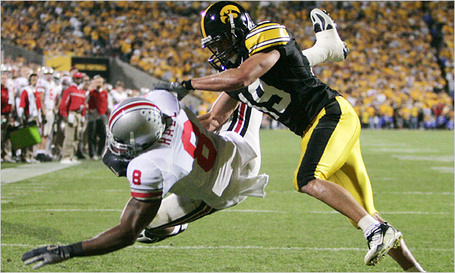 I think I see Bama Hawkeye...

Michigan State:  Okay, I've got to give you a little respect because Mark Dantonio is a Buckeye, and he did lead us to our 2002 championship.  Still, how did a defensive mastermind give up 45 points to the ninth-worst offense in the conference?  Hell, Purdue held us to 16.  By the way, who is Greg Jones?

Minnesota: Congratulations on the new stadium.  Now if you could only find 50,000 people who want to sit outside in November to watch you play football.  By the way, great showing against Kansas.  You might have been the only bowl team in the country last year that couldn't figure out how to slow down a Big 12 offense.

Penn State: Sure, it's cute pretending we're rivals and all, but I think you need to win the conference more than 3 times in 18 years to play with the big boys.  Let's go to the scoreboard:

Purdue: Call me in 5 years.

Wisconsin: You guys always come to play, and I'm a big fan of Camp Randall.  Then again, you lost to Michigan last year and that might be the saddest thing ever.

Michigan: Has it really been 2000 days?  Time flies when you're having fun.  By the way, thanks for sending down Justin Boren.  He may be lazy, but the dude can run-block.