We, The Rivalry, Esq. place before this college football court, the 2009 season of the Michigan Wolverines.  This is a proud, historic program that has come upon the worst of its times.  The debate has raged on; is it time for a rebound?  I say to you, ladies and gentlemen of the college football jury, ENOUGH!  Let this court give them the fair assessment that they deserve. 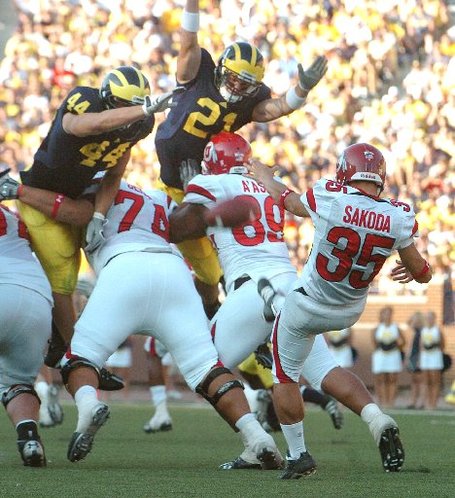 No one is expecting a Big Ten title this year, but the number in the wins column better be bigger than the number in the loss column.  Coach Rodriguez has worked some turnarounds before.  He better do it again.

Is Michigan the new Notre Dame?

We help schedule (they ended up with UConn)

A. I Hate Michigan

Maybe its because he's lived too long in the South, where hatred is a tangible commodity, but Bama Hawkeye has felt his hatred for Big Ten rivals boiling.  Here's why he hates Michigan.

I hate that you stole your helmet design from Princeton and then act like it was yours all along...I hate your superiority complex...I hate that you have been so pitiful against Ohio State lately that I've resorted to rooting for you just so I can hate you both equally again...I hate you for the Fab Five...I hate that you deify Bo Schembechler, who won as many national titles as any Indiana head coach, but look at me cross-eyed when I mention Harry Kipke...I hate that Brent Musberger lives in Ann Arbor and can barely hide his loyalties...I hate that despite being the Big Ten's football bell cow, you have a losing bowl record...I hate Michigan.

B. Why You Should Love Michigan 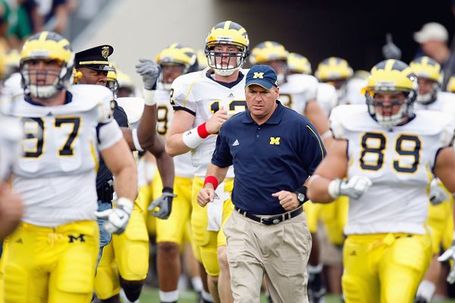 No way they miss a bowl again, right?  Right.  I expect the bowls to jump on the opportunity to bring Michigan (and an energized fan base) to their towns.  8-4 will get them to Orlando.  Win one more, and it might be the same city for a better bowl.

Words from an SBNation blogger on their team. Dave at Maize n Brew had an inspired idea for improving game day at the Big House.  Think big.  No, that's not big enough...

As you can see, the CLOVERFIELDTRON is four hundred feet high and so large that you can't even make out the complete "Michigan" over the top of it because it wraps around to the other luxury box, not because we suck at MS Paint. Further, when football is not being played, the American Flag will be its screen saver, reminding the world that Freedom brings you cool shit like this. It will be a constant reminder to all that you should live American, breathe American and buy American (specifically GM cars. Please? Anyone?). This, frankly, is the most AMERICAN scoreboard ever proposed. What's more American than building something unnecessary and totally symbolic on the backs of migrant and likely illegal immigrant workers? Nothing. If you are against this you are against America, and probably watch men's figure skating. So why are you against America? You can't be.CLOVERFIELDTRON = America