We, The Rivalry, Esq. place before this college football court, the 2009 season of the Michigan St. Spartans.  This is a long-sleeping giant that may well have awoken...unless it hits the snooze button again.  The summer has been filled with debate.  I say to you, ladies and gentlemen of the college football jury, ENOUGH!  Let this court give them the fair assessment that they deserve. 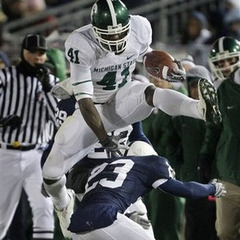 It was a good year for Michigan State.  Beat Notre Dame?  Check.  Beat Michigan...in the Big House?  Check!  Yes, the Spartans came up short against Penn State and Ohio State.  That happened to almost everyone.  But, MSU established themselves as the third best team in the league.  They also played a good game against the preseason #1 team in the country.  Yes, Georgia won in the end, but Sparty didn't embarrass himself or the conference.

What MSU Recruiting Means for the Big Ten

Are the Spartans the Big Ten's 3rd Best Team?

Because all blogs are required to compare athletic teams to some random entertainment icon, we're equating Big Ten Teams and Michael Jackson songs.  The quality of the reading improves if you listen to the barely justified song choice as you continue.

Don't Stop, Michigan State.  You're not there yet.

A. I Hate Michigan State

Maybe its because he's lived too long in the South, where hatred is a tangible commodity, but Bama Hawkeye has felt his hatred for Big Ten rivals boiling.  Here's why he hates Michigan State.

B. Why You Should Love Michigan State 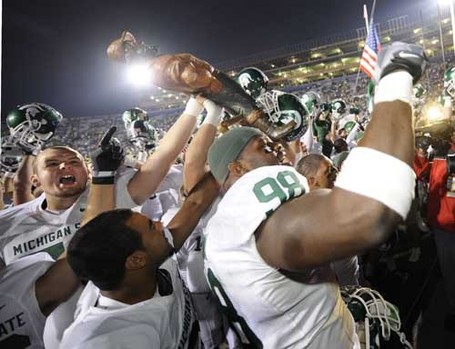 The Big Ten has nine bowl eligible teams by the end of the season.  Despite having a better record (by a game), Michigan State gets passed over by Penn State and Michigan in bowl selections.  At least a trip to the desert beats a third straight trip to Orlando.

Words from an SBNation blogger on their team.  You can't go wrong with The Only Colors.  Here's Pete's opinion on what it will take to gain the respect of the Wolverines

The same thing any team has to do in any rivalry to gain respect - win.  I think some of the fire has been added back to the rivalry since the win last October; it's tough to remember how much it stinks to lose to your rival when you've won six years in a row.  That said, there's going to be some subset of Michigan's fan base that will never respect the Spartans.